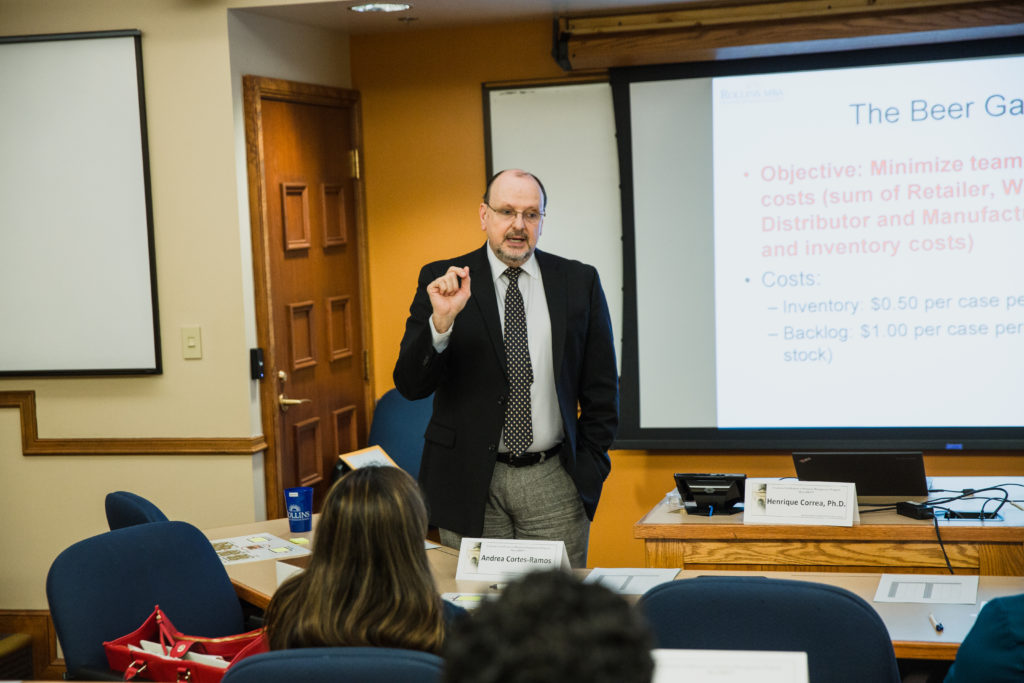 Crummer’s Steinmetz Chair of Management, Dr. Henrique Correa, is one of the most well-traveled professors at Crummer.

Over the course of the year, you can find him teaching at Polytechnic University of Milan in Italy, at the University of São Paulo in Brazil, at IPADE in Mexico, and at the University of Porto in Portugal. That’s not even counting the consulting he does at major global companies like Unilever, where he trains a great percentage of the supply chain planners in North America.

While sharing his vast global business perspective with his students is one of the biggest attributes of his travels, Dr. Correa also gets to see first-hand the difference in skillsets among students across the world.

“When I go to Mexico and Brazil, I see a level of interest in supply chain management, in the production, planning and control side. It’s much higher there than what I see in the United States,” said Dr. Correa.

According to Dr. Correa, there has been a gap in education in terms of supply chain planning over the last 15-20 years.

To understand why this happened, you have to examine the U.S. economy and its shift towards outsourcing manufacturing.

According to the Brookings Institution Center of Technology Innovation, employment in the manufacturing sector dropped from 14 percent of the workforce in 1996 to just eight percent today.

Over the past 20 years, many U.S. companies started to outsource heavily to countries like China, Brazil, and Mexico, as companies sought low-cost labor and nations with fewer regulations.

“The U.S. sort of gave up on manufacturing,” explained Dr. Correa.

However, in recent years, the outlook on manufacturing in the U.S. has started to look more promising.

The Brookings Institution reports manufacturing employment increased to around 12.3 million in 2016, still down from 14.5 million in 2006, but trending in the right direction.

A big reason for the shift?

Technology (automation, robotics, and advanced manufacturing) is helping workers produce at much higher rates than ever, and making it more practical to produce domestically, rather than outsourcing everything.

“For a number of products, like shampoo, which is mostly water, it’s not economically viable for you to outsource the manufacturing,” explained Dr. Correa. “For some of these products, you’re spending a bunch of money on the transportation and logistics of water.”

“You are talking about thousands of people that need to be managed at these plants,” said Dr. Correa. “If you stop training this type of manager for 20 years, then you are going to have to import the manager. So, there are high-paying jobs out there that could be done by Americans with the right skills.”

Two years ago, as Dr. Correa noticed the gap in education among U.S. students compared to Brazil and Mexico, he thought of launching his own class at Crummer.

Making Supply Meet Demand is built upon the very principles that Dr. Correa teaches to the supply chain planners at Unilever, which was just recently named a “Master” of supply chain management in Gartner’s 2019 rankings.

The class also delves into the supply chain of companies like Beiersdorf, an international skin care company, and Diageo, one of the world’s largest producers of spirits and beers.

He says this class is the first of its kind, and Crummer is leading the charge for U.S. business schools teaching these skills again.

“This class is all about supply management and demand management. Demand management is basically forecasting in ways for you to influence demand, so that demand is better behaved, therefore easier for you to meet. Once you have demand for the future, then you have to plan the supply for it: production, purchasing, and scheduling,” said Dr. Correa.

He says if students learn to master these skills – they’ll be in very high demand for the high-paying supply chain jobs that many companies have to go internationally to recruit for. Dr. Correa explained that’s why there are so many international executives in many of these high-paying planning operations roles.

If you go to a company and say ‘I know planning,’ odds are you will be hired,” said Dr. Correa. “The content I bring to students is exactly the content that all these companies are interested in.”

While the United States may never be the manufacturing giant it once was, statistics are showing a shift to more manufacturing jobs domestically, and they are going to need qualified individuals to fill them.

“Employable skills in planning are only going to go up, because although people normally say it’s an era of outsourcing, products will keep on having to be produced; there is no magic,” said Dr. Correa.

Dr. Brian Walkup brings an entrepreneurial spirit and a unique perspective to Crummer.

Jacob Werksman, founder of Victory Strategies, a leadership assessment and development company, offers a playbook for success in his new book.