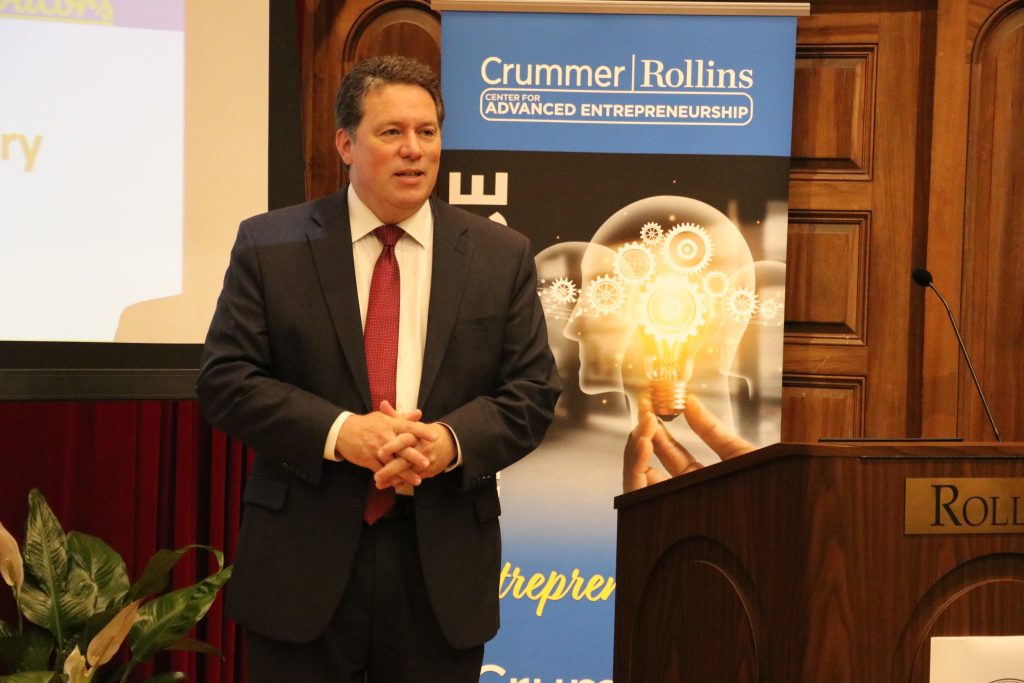 For Crummer Entrepreneur-in-Residence Pete McAlindon, helping connect people with their purpose and others is his ikigai.

If you’ve ever had a class or a conversation with Dr. Pete McAlindon, you’ve likely heard him mention the concept of ikigai (pronounced ee-key-guy). The Japanese phrase combines the word “iki,” which means life, with “gai,” or worth.

“It’s the lifelong search for one’s purpose,” said Dr. McAlindon, Crummer’s entrepreneur-in-residence. “And there is absolutely nothing more rewarding than watching someone figure out their ikigai right before your eyes.”

McAlindon has been a serial entrepreneur in Orlando for 26 years, but the journey of finding his own ikigai came while testing the orbiTouch, an ergonomic keyless keyboard and mouse that requires no wrist motion or fingers to operate. The idea for the National Science Foundation-funded technology came to him while he was still a grad student.

“One morning, I flipped two cereal bowls upside down and thought to myself, if I can somehow get these to type, it would help so many of us in the lab,” he said. “Several people had the beginnings of carpal tunnel syndrome.”

McAlindon didn’t realize how many people the orbiTouch would help until he began meeting and hearing from the people whose life it changed.

One was Debra, a woman in her early 60s who participated in his initial study. She informed McAlindon that she had been a typing instructor for 30 years and wanted to start writing again, so he sat her down, explained how the research protocol worked, and told her to stop if she felt any pain.

A few minutes later, he looked over and saw tears streaming down her face. He walked over to remind her she was supposed to stop if she felt pain. Debra looked up at McAlindon and showed him both of her wrists that had visible scars from the multiple surgeries she’d had for carpal tunnel.

“ ‘I have not been able to comfortably type with a keyboard the way that I have with this in a long time,’ ” McAlindon recalls her saying to him. “Most people don’t think twice about using a keyboard, but here’s Debra who taught typing for a living, and hadn’t been able to use the simple device in years—something most of us take for granted. You talk about those things that really begin to strengthen your ikigai—it’s people like Debra.”

The other was a little girl named Amy, who has cerebral palsy and low vision. Her occupational therapist sent McAlindon a photo of Amy using the orbiTouch and note thanking him for helping her feel normal in the classroom.

“I was so touched,” he said. “And I began to see what the investors saw and why people stayed in the study. There was something much bigger going on here than learning how to type on a radically different keyboard.”

The thing that was much bigger—helping people with disabilities gain or regain the ability to communicate with others—would become not only the focus of orbiTouch, but inform McAlindon’s ikigai.

Since those early days, the orbiTouch has helped people with prostheses and limited hand and finger mobility as a result of injury, arthritis, and strokes, as well as people who are visually impaired, blind and have autism. The technology has received the daVinci award for design as well as the top honor for accessible technology at the Consumer Electronics Show, and is part of Blue Orb, the tech company McAlindon founded that has received $5 million in angel investment funding for developing computer technology for people with disabilities.

The lessons McAlindon learned during the process of developing the orbiTouch helps drive everything from how he teaches to his role as a meta-mentor, helping connect would-be entrepreneurs with the people who can help turn their idea into a successful business venture.

“When you’re starting any business what you want is for those first few customers to tell a whole bunch of people about your product or service on your behalf, because they want to—not because you have to pay them. That’s really where the magic begins to start,” he said. “Once you have that, my job as a meta-mentor is easy. I help find other mentors for each stage of that entrepreneur’s journey and help manage the mentors.”

One of the many entrepreneurs McAlindon has served as a meta-mentor to is Marcus Brooks ’17MBA. 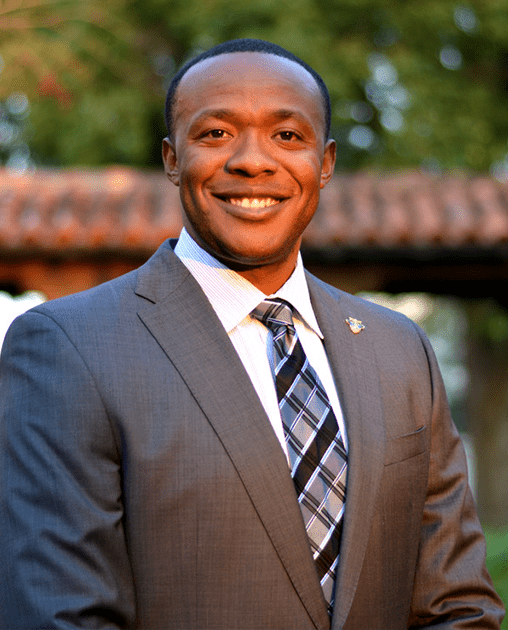 Brooks had been all set to lead a platoon as an Army officer, but a few weeks before he graduated from West Point, doctors discovered his lower jaw was full of tumors. While other students were preparing to graduate and being sent off to Afghanistan and Iraq, he was undergoing several surgeries to have the tumors removed and have his jaw rebuilt. Soon after, he became one of the founding members of Warrior Center Health, which provides education and training to physicians about treating veterans, their families, and other military personnel, as a way to help his friends and classmates who had gone overseas and returned with mental, physical, and behavioral issues.

After earning a scholarship from the Army, he enrolled at Crummer knowing he wanted to hone his skills as an entrepreneur and network with other like-minded individuals. That’s when he met McAlindon, who teaches courses on starting new ventures, among others.

“Dr. Pete was integral to my Crummer experience,” said Davis, who is currently working with several startups. “He brought in a number of industry experts and other entrepreneurs from the Central Florida area to talk with our classes and provide us with additional challenging opportunities. But he’s also always been available to talk about one-on-one with me, including bringing me into venVelo, which has helped me network tremendously in and around Central Florida.”

As a teacher, co-founder of venVelo, and faculty advisor for Crummer’s Entrepreneurial Scholar of Distinction program, McAlindon continues to strengthen his ikigai by connecting people together, whether through technology for people with disabilities or through networking for people wanting to start or expand their business.

“That’s what I love about Crummer,” McAlindon said. “We’re a magnet for anyone to come in and say, ‘I have an idea, but I’m not sure exactly where to go.’ Well, tell me about your idea. Oh, you need to talk to this person, go speak to that group. Let me introduce you to this person, or come to our mini-MBA program, come to the MBA programs themselves, be part of the Center for Advanced Entrepreneurship. We just keep plugging people into the system and helping them find their place in our network. And that’s really what makes the difference.”

Crummer Alumna on the Cutting-Edge of the MarTech Revolution