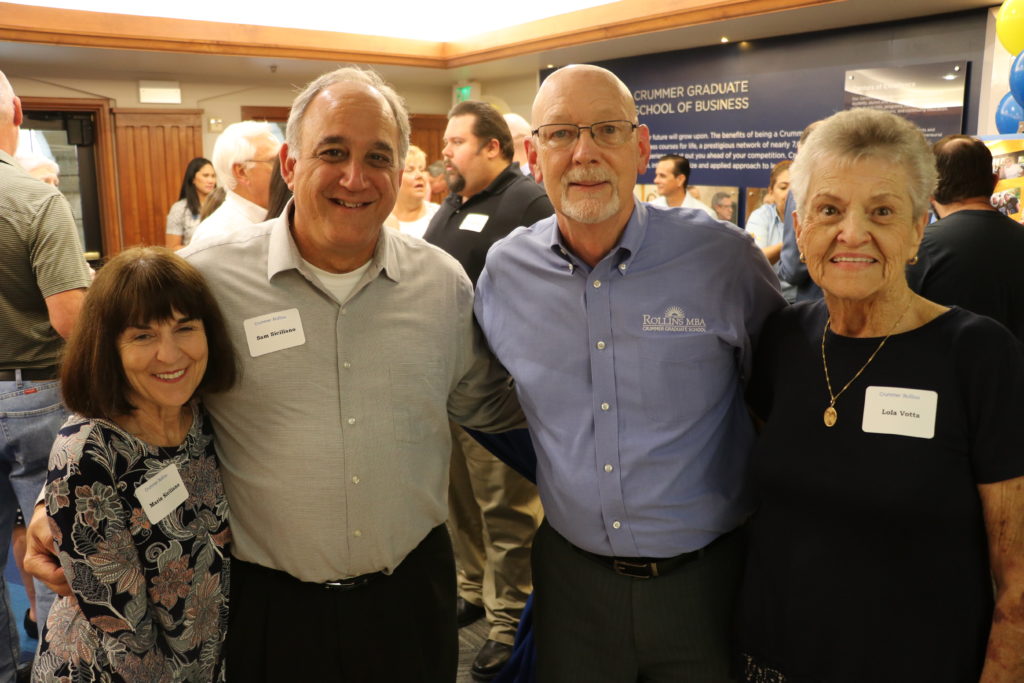 Steve Gauthier ’82MBA reflects on his nearly four decades of experience at Crummer and discusses his plans for the future.

Steve Gauthier has just about seen it all during his 36 years of service at the Crummer Graduate School of Business at Rollins College.

Hired originally as assistant dean, Gauthier has played in integral role in helping solidify the Crummer School as a prestigious MBA program in not just Florida, but the entire country.

At the beginning of his tenure, Crummer wasn’t nearly what we think of it today.

“When I started here, it was just the Dean, Dr. Martin Schatz, and myself. I was the assistant dean and we had an assistant each. That was the entire staff. There were four of us,” said Gauthier. “We had twelve faculty members and that was everyone.”

A graduate of Crummer in 1982, Steve Gauthier’s roots are up north in Massachusetts, which is evident anytime you walk into Steve’s office and see his Boston sports insignia strewn across the walls.

Prior to coming to Crummer, Steve worked in education, where he was an administrator at a private school in Massachusetts and then a high school math teacher. Along the way, he realized he wasn’t going to be able to support a family with his salary, so he decided to explore the option of going back to school for his MBA.

During his time as a teacher, he met a friend who worked in undergraduate admissions at Rollins College and suggested he visit the campus to get a feel for the MBA program there. It wasn’t long before Steve was packing the moving boxes and heading towards Florida.

Originally, he promised his wife it would only be for his MBA and then they would head back up north.

“She was allergic to sunshine,” laughed Gauthier.

However, the connections he made during his time in the MBA program opened up too many opportunities for him to move back to Massachusetts. His wife supported the decision, and he took a job as a director of marketing for a laser company, but he was only there for one year before Dean Schatz tapped him for the role of assistant dean.

In the early days, when there were only four staff members and 12 faculty members, Steve recalls wearing many hats in his role as assistant dean. From admissions, to marketing, to student services and internal finances, Steve became well-versed in all the aspects of running a business school.

One of the biggest accomplishments he’s proud of over his 36 years at Crummer was helping the school develop lockstep programming and eventually becoming accredited.

Lockstep programming is how students today go through the MBA program. Instead of each student individually choosing each class, they remained in their teams.

“That is where they enter as an MBA class and moved through the program together,” said Gauthier. “It meant recruiting a smaller class and was risky, but our graduation rate went right up and was a big success point of the program here.”

Gauthier says after they redesigned the curriculum to be more cohort focused, they became accredited, and that’s what opened up the doors for the Crummer School we know today.

“That was when we really started adding a full staff. We started to have an alumni base building and the Management and Executive Education Center was starting to take off. We slowly started adding things over time,” said Gauthier.

He also enjoyed the opportunity to travel to three different continents and seven different countries for various international experiences during his time at Crummer.

“Steve Gauthier has been an incredible asset to Crummer over the past 36 years,” said Dean Deborah Crown. “He has worked tirelessly to advance the Crummer mission of building global, responsible and innovative leaders, and we are so sad to see him go, but so excited for him to enjoy his retirement.”

He was fortunate to have caught it early and his doctors feel they will be able to manage the disease.

He is also planning to get involved in the non-profit sector, working with first and second graders on reading projects.

A consistent gym schedule and plenty of bike riding is also in the books.

After 36 years at Crummer, it won’t be easy to walk away completely.

Steve is planning to continue working part-time for Crummer as he transitions into retirement.

For Steve, there’s been no greater joy during his career at Crummer than seeing students transform into CEOs, c-suite executives, and community leaders who are making an impact.

“I love hearing from parents around graduation time when they say they can’t believe the change in their child over the past two years, how they’ve matured and how successful they see they are going to be. That means a lot,” said Gauthier.

As COVID-19 rapidly changes the future of business, Crummer adapts to mirror the workforce of the future with state-of-the-art collaboration tools.

John Race `77 `84MBA, Chairman of the Crummer Board of Overseers, discusses his path to partnership at DePrince, Race & Zollo Inc., as well his close ties with Crummer.