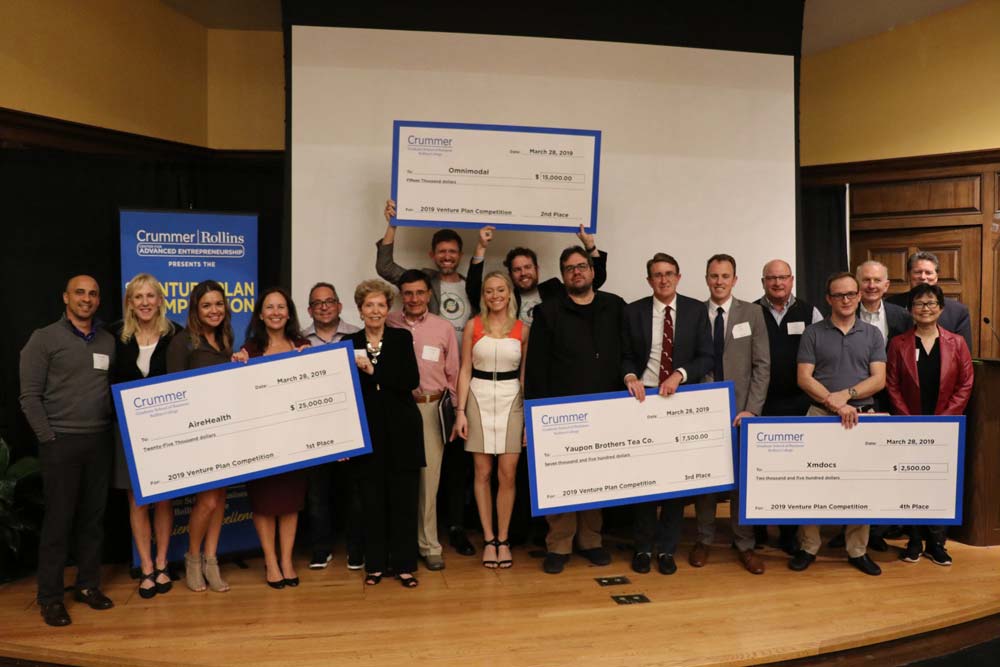 A first-place win at Crummer’s Venture Plan Competition, Central Florida’s largest and most comprehensive business plan and pitch competition has proven to be a great precursor to a very successful business venture for many Central Florida startups.

The annual Rollins Venture Plan Competition, hosted by Crummer every year since 2004, is Central Florida’s largest, most prestigious, and comprehensive business plan and pitch competition for startups. Open to all regionally headquartered startups, the annual competition is where teams battle for funding, exposure, and mentorship in front of the region’s top entrepreneurs, leaders, and venture capitalists.

In 2021, finalists competed for their share of a prize package valued at over $100,000. The first-place winner received $25,000 in cash addition to entry into the StarterStudio Seed Fund – another opportunity to qualify for $25,000 in a convertible note. Second and third place finishers received $10,000 and $5,000 in cash, respectively, along with weeks of mentorship and exposure in front of Central Florida’s most successful entrepreneurs.

Former Venture Plan Winners have had an exciting past couple of years.

2015 Crummer Rollins Venture Plan Competition winner Stax by Fattmerchant, a payment processing company, is one of the United State’s fastest growing fintech companies. They recently crossed the $9 billion in processing milestone, and are on track to hit $10 billion soon. Their CEO who led them through the Venture Plan Competition process, Suneera Madhani, was recently nominated by Finovate as the Fintech Woman of the Year Award for 2021.

EASE by Vocera, a cloud-based healthcare communication platform to give family members timely updates on the progress of their loved ones, won the Crummer Rollins Venture Plan Competition in 2014. In late 2020, they were acquired by the publicly traded Vocera Communications (NYSE: VCRA).

With more than 1.6 million sent messages since their time in the Crummer Rollins Venture Plan Competition, the EASE application is receiving stellar reviews for their efforts in improving patient experience. In one study with approximately 2,500 family members, 98% said that EASE reduced their anxiety, and 81% reported that the availability of EASE would influence their choice of hospital.

Statusphere, an influencer marketing company, is on the cutting-edge of where brands meet influencers in the rapidly-growing social media marketing industry. They currently employ over 20 people and are actively looking to grow and expand their team.

AireHealth, revolutionizing respiratory care as the first FDA-cleared portable nebulizer, went on to win Steve Case’s Rise of the Rest competition shortly after winning the Venture Plan Competition. They recently appointed Kien Nguyen, an executive with over 30 years of innovative healthcare leadership as their next CEO in 2021 as they look to disrupt the market.

Founder and CEO of Mindstamp, Brett Lindenberg, says Mindstamp is using the cash from winning the Venture Plan Competition to deploy their go-to-market strategy.

“The Crummer Rollins Venture Plan Competition was perfectly timed as Mindstamp continues to accelerate its growth. It allowed us to focus on who our customers are and how interactive video can dramatically enhance their marketing, sales and training, regardless of industry,” said Brett Lindenberg, Mindstamp founder and CEO.

Exhalence is looking to take a NASA-patented nanosensor technology to market, creating a breathalyzer for monitoring glucose levels.