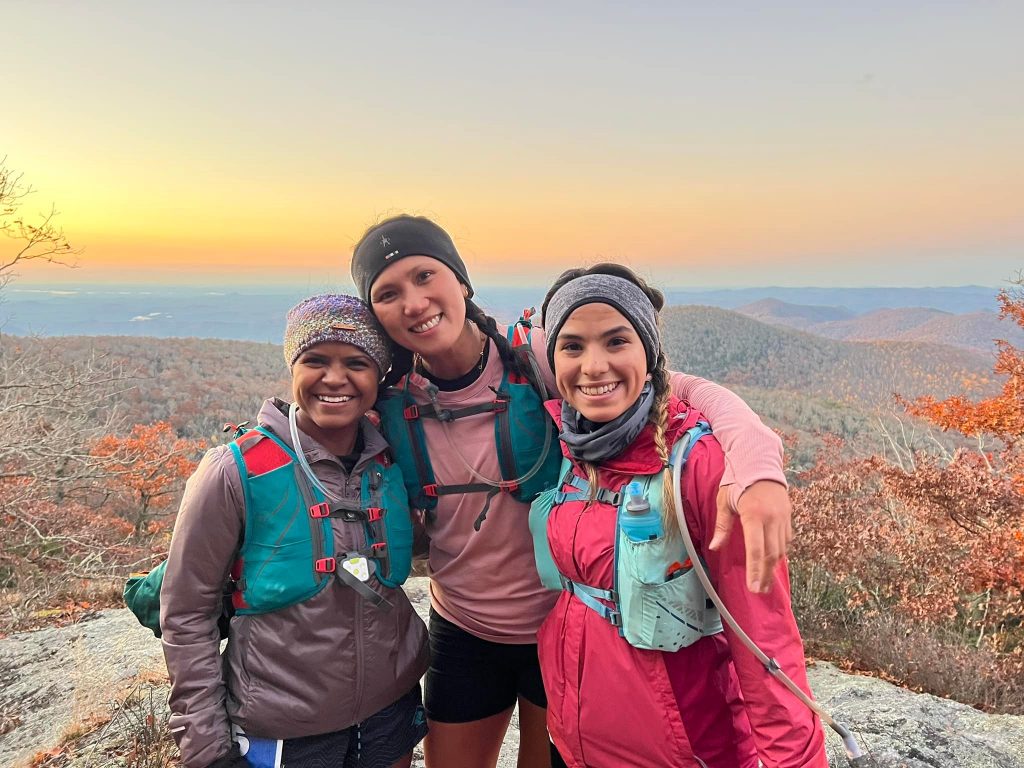 Lovelyn Findley ’19 ’21MBA and Milita Rana ’16MBA are encouraging connection, purpose, and breakthroughs as co-leaders of O-Town Blazers—and finding all three for themselves along the way.

As a relative newbie to the world of ultrarunning, Lovelyn Findley ’19 ’21MBA has experienced her fair share of imposter syndrome.

First, she’s a woman in a sport dominated by men. Even of the women who do participate, most are white, where Findley is filipino. And unlike many ultrarunners, defined as those who run more than 30 miles, she only started running three years ago. She skipped straight from a 10K to 50K—bypassing the traditional marathon all together—before making a giant leap to a 100-mile race only three months later.

“Every single race, I’m like, ‘What are you doing here? You don’t belong here,’ ” said Findley, who is the program manager for alumni relations at Crummer. 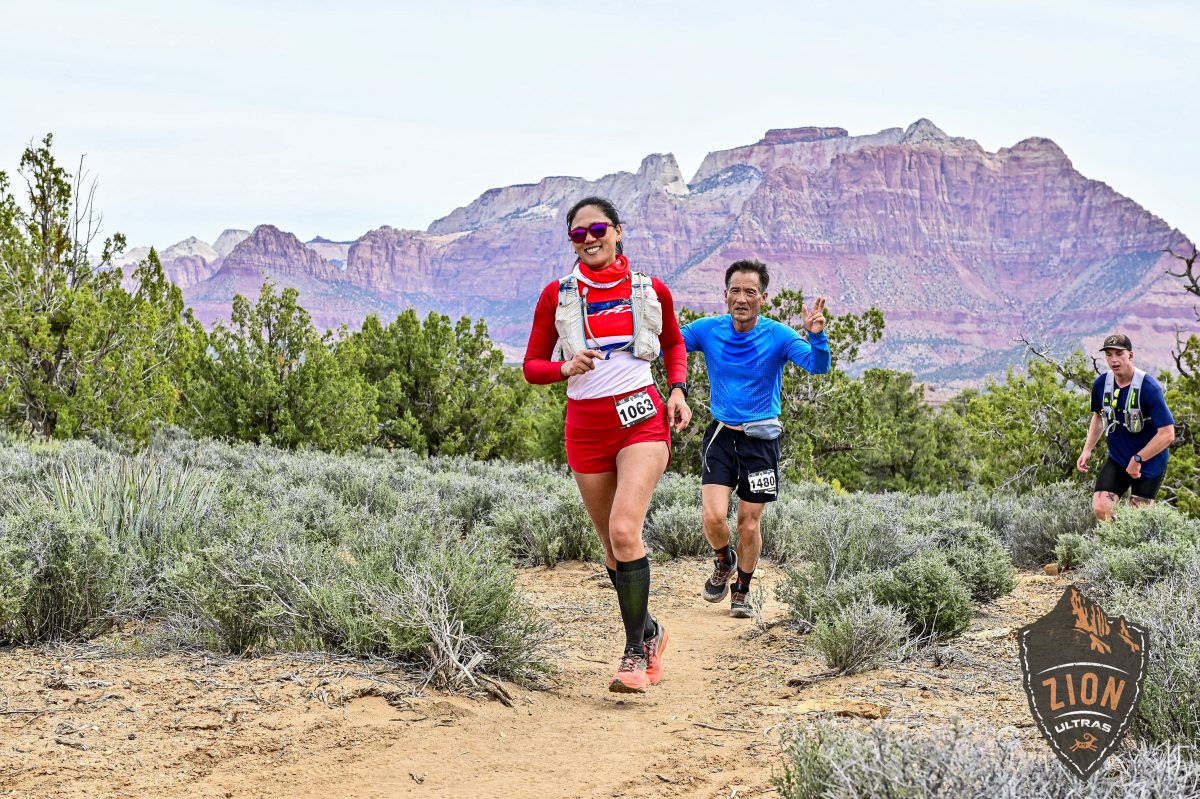 Despite that self-doubt, Findley is set to run her second 100-mile race next weekend at the KEYS100, where she’ll run nearly the entire length of the iconic Overseas Highway from Key Largo to Key West. She’s doing it because, yes, she likes a challenge, but also because she wants to see more women who look like her compete and on the trails she runs during training—and because she doesn’t want to do it alone.

“That first 100-mile race I did, I looked around, and I was the only person who looked like me,” she said. “It made me wonder what was the point of me competing? I could just go on running on my own and nobody would really care. But the whole purpose is to show other women of color and women like me that we can do this. We can be on that frontline. And we don’t have to do it alone.”

In 2021, Findley created O-Town Blazers, a Facebook group aimed to bring people together to run trails around Central Florida, as a way to not feel alone and to get outside more during the pandemic. The group currently has 484 members, including all races and genders, and meets every Saturday morning at 7:30 a.m. to run different trails.

“We’re called the O-Town Blazers because of our location and because of the paint markers on trees that mark the trail,” she says. “I started the group with a couple of my female friends, as a place for people like me—who enjoy being in the woods, want to feel safe, and have company.”

It’s also a place where she’s forging lifelong friendships, including with Milita Rana ’16MBA. The two met at Crummer and stayed connected through social media, but became friends and running mates after Findley reached out in February of 2021 and asked Rana to join.

“I had never explored trail running,” said Rana. “She invited me to that run after seeing me post about doing the OUC Half Marathon, and then the rest of it is history. Now we’re running buds, friends, and partners in crime. Blazers has given me a community, but also helps me work towards my personal goal of encouraging more women of color to run while providing them a safe platform.”

After just over 10 hours, Findley and Rana crossed the finish line of their first 50K—the Georgia Sky to Summit—holding hands with friend Rosangela Spear, on Nov. 13, 2021.

The 30.6-mile race through the mountains of northern Georgia has 7,500 feet of elevation gain and takes participants past more than 20 waterfalls, and to the top of Rabun Bald, the second tallest mountain in the state, twice.

“We didn’t know what to expect,” said Findley. “We had never done that much mileage especially in the mountains—we were used to running the Florida trails. We were really scared, and promised to finish together, which we did. We were there for each other because we knew we wanted to get it done together. And we brought our flags—Rose is from Venezuela, Milita is from India, and I’m from the Philippines—because we knew this was important to us, because we didn’t see any other women of color on the roster.”

“A year prior, none of us had thought running that race would be possible in a gazillion light years,” Rana said. “My favorite runner, Eliud Kipchoge, has the quote, ‘I am possible.’ That ‘I am possible’ came true for me during that moment of crossing the finish line at Sky to Summit alongside two other women of color, who I love so much.”

But not every moment of every race is as triumphant as that one. During the Forgotten Florida 100, Findley’s first 100-mile race, Findley found herself neck-deep in mud.

“That race was super, super, super muddy,” Findley recalled. “I think it was around 3 a.m., I was by myself, and I stepped down and fell into the mud all the way up to my neck. It was scary and ridiculous, and I briefly was like, ‘Oh no, I’m going to die today.’”

The Forgotten Florida is held in February and starts deep in the William Beardall Tosohatchee Wildlife Preserve and winds down to the 528 before heading up past Christmas, Oviedo, and ending in Winter Springs. The official map includes skull and bones icons and watercrossing symbols with notes that read: “usually muddy through here…sorry” and “wet feet always.”

“I was just tired and done, but realized I still had a full marathon to go,” Findley said. “That was the lowest part of my race.” 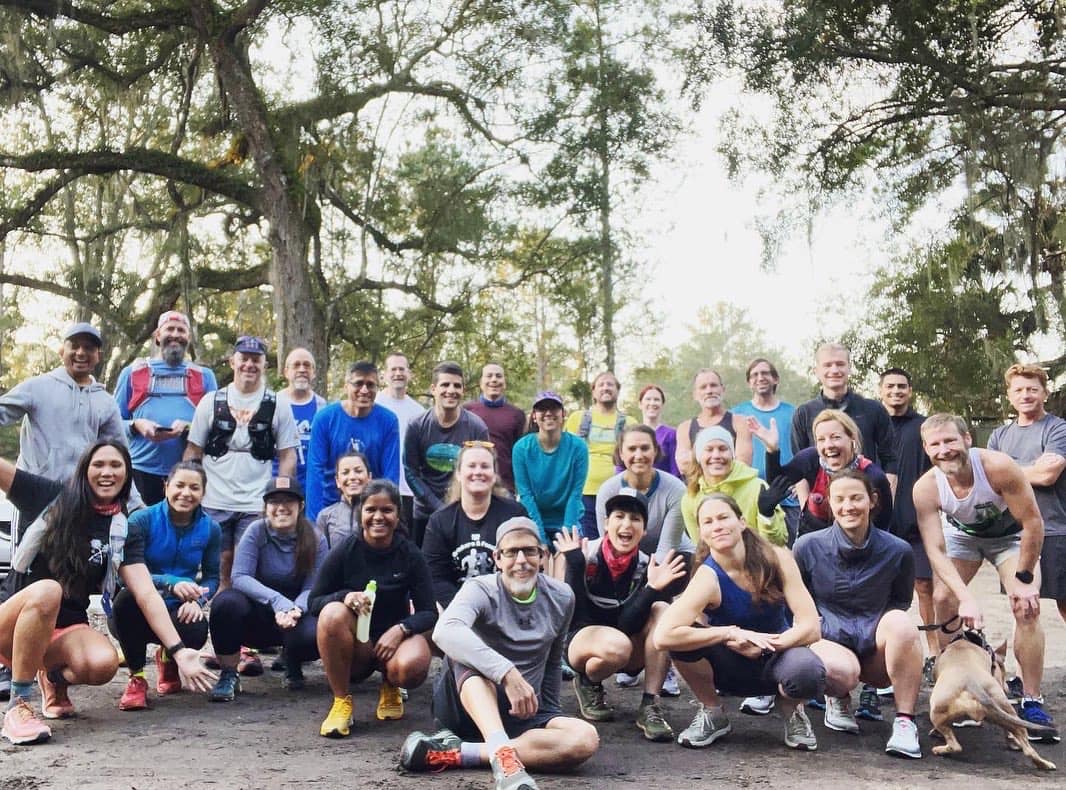 And then she saw her crew cheering her on. That includes Rana, who had completed 30 miles of the race alongside Findley, before finishing another 15 by herself, and coming back the next morning to see her friend finish the race.

“I had arrived around 6 a.m. to wait for her,” Rana said. “When I saw her, I could tell she had been through a lot. It was maybe 8 a.m., and she saw me and two of her other girlfriends, Nadine and Maha, and just started crying. We hugged her and you could just feel this sense of relief that ‘My people are here and I’m going to finish.’ We joined her for the last 12 miles, crossed the finish line and celebrated with champagne.”

“Doing an ultra is 20% physical and 80% mental,” she said. “My crew was all women—women who are part of the O-Town Blazers and are my friends—because I wanted the race to be about empowering each other. I was doing it for them. There are so many photos of me crying, and people thought it was because I was exhausted. But actually I was just so happy to see them.”

The Inspiration That Started It All

Some people start running because they want to lose weight or get stronger. For Findley, it was because of a video she watched about ultramarathon runner Scott Jurek’s journey to thru-hike the Appalachian Trail in only 46 days.

“He was so broken at points, but he was able to push through,” Findley said. “I was so inspired to see how at peace he was and how well he knew himself. I wanted to get to know myself that well too, and I figured if he could run it, I could certainly walk it.”

So she started. This was in 2018, and she was a full-time undergraduate student studying healthcare management and leadership at the Hamilton Holt School, was working full-time, and had two young sons and a husband. For her 38th birthday that September, she and her husband started hiking the Appalachian Trail in sections. She has since completed more than 350 miles of the more than 2,100-mile long trail that runs from Georgia to Maine, in between classes, studying, earning her Crummer MBA, working, training, and taking care of a family. She’s scheduled to run eight more races this year after the KEYS100, including at least two with Rana.

“We will be doing Sky to Summit again this year together—but the 100K instead of the 50K,” said Rana. “And we are also planning to do Ragnar as a two woman of color team. As far as we know, we will be the first two women of color team to each do a 100K at Ragnar and try to beat the fastest time of the only two other women who have done it before.”

Rana says she may never have dreamed of doing any of them without Findley’s encouragement and the support of the O-Town Blazers.

For Findley, she admits to having found the sense of peace and purpose she so admired in Jurek.

“There are different reasons for why people run ultramarathons,” she said. “At some point, it becomes a part of your heart, your mind—it’s who you are now. For me, it’s just being out there. All I can think about is putting one foot in front of the other—and the next and the next and the next. But when you’re doing it with other people and they’re doing the same exact thing, it makes me feel like this is where I’m supposed to be. It’s who I am. I belong here.”

Dr. Mitchell Isert '91 ’18 Executive DBA examines how important listening is to the long-term success of salespeople.

Following its 2021 Crummer Venture Plan Competition first-place finish, Mindstamp, says the winnings will be used to invest and expand the delivery of the video platform worldwide.

Netherlands sustainability and marketing expert spoke to Crummer students about the importance of creating a sustainable future.