Grant Cornwell, President of Rollins College, spoke to Crummer students to share his wisdom on the importance of mentors and his philosophy on leadership.

In a topic near and dear to his heart, Rollins College President Dr. Grant Cornwell spent the evening sharing thoughts on mentorship and leadership with Crummer Graduate School of Business Students as part of the Crummer Speaks series hosted by Crummer’s Center for Leadership Development.

Taking over as the 15th President of Rollins College in June of 2015, Cornwell made his way to Central Florida after serving as the president of The College of Wooster in Ohio for eight years, and before that, serving as vice president of the university and dean of academic affairs at St. Lawrence University, where he spent a total of 21 years between that position and as a faculty member.

Cornwell opened  his talk by posing the question, “what actually matters in college?”

The Gallup study, Great Jobs and Great Lives, interviewed over 70,000 college graduates, searching for a correlation between graduates who have great jobs and great lives, and what mattered to them in college.

The number one finding the research showed was that people with great jobs and great lives had a mentor or mentors in their undergraduate experience that took an interest in them and their success.

“The reason that’s such an important finding to me, is that is exactly the model of education that Rollins and Crummer represents,” said Cornwell. “This is not a system of mass education or credentialing. To me, the whole body of the Gallup research is the value proposition of a Crummer education and a Rollins education at large.” 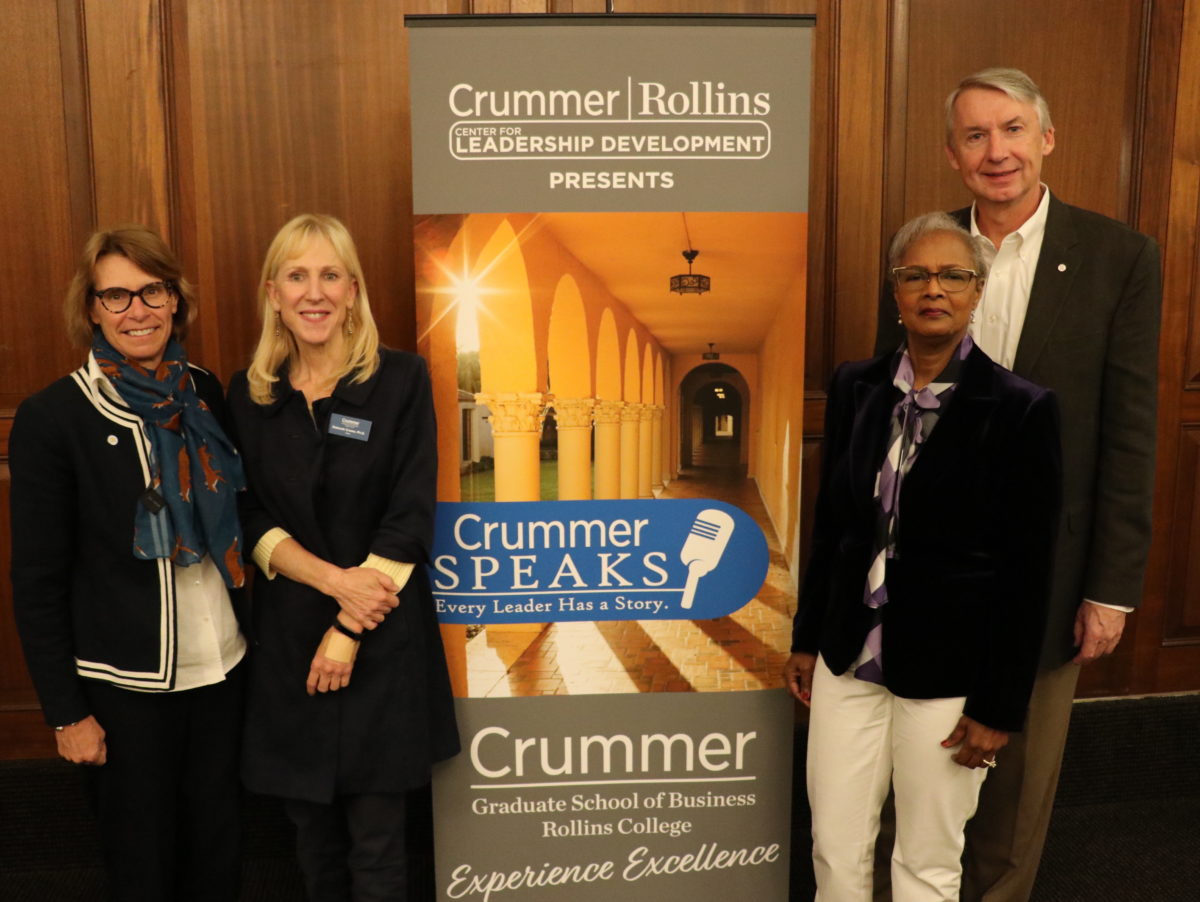 President Cornwell’s first tip on mentorships is to not wait on a mentor to come to you.

The mentorship relationship should be two-ways, with the mentee being eager to learn and the mentor eager to teach, but it’s up to the mentee to initiate that relationship.

“I certainly think the agency lies with the person who is actually seeking mentoring from someone they admire,” said Cornwell.

Mentorship has been a cornerstone of Cornwell’s own career trajectory,  starting in his undergraduate days at St. Lawrence, where he was studying philosophy.

“I had two professors that were my first two mentors,” said Cornwell. “They both had an enormous influence on how I think, how well I think, and how well I write, because they were tough as can be and relentless in having me hold higher standards of rigor in my thinking.”

Cornwell recalls one of his mentors kept giving him “B’s” on all of his assignments and kept challenging him to do better, even when he thought he was trying his hardest.

“I sat down with the professor and asked what it takes to do A-level work and he said maybe you’re just a B-level student,” recalled Cornwell, smirking. “Before the end of the course I did end up getting an A.”

Cornwell found his next mentor after he finished up his PhD at the University of Chicago and started his career as a faculty member at St. Lawrence (interestingly, Cornwell’s first two mentors were now his colleagues and would eventually be under him as he became head of the department).

This mentor, a high-level administrator at the college, taught him the art of complex campus politics and how to manage the functioning of large organizations to create change.

“To me, politics is not a dirty word. As a scholar of Greek Philosophy, politics is the art of governance, the art of creating a community or organization that is well run and fosters the good work and flourishing of its members,” said Cornwell.

Cornwell ended up becoming the dean of the program, when that mentor left for a new leadership position at another college. He credits much of his leadership today to that mentor.

“I have always learned a tremendous amount from mentors, many positive lessons about how to do things well, but many are negative lessons on failures or shortcomings,” said Cornwell.

Cornwell says along with learning positive lessons from mentors, be able to take a step back and watch areas that they failed in, so you can do better.

After over 20 years of service, Cornwell left St. Lawrence to take on the presidency at The College of Wooster. As a new president, he still kept a mentor as he guided a college in its highest office for the first time.

“I have the highest respect for this mentor, Jim; he was my first board chair,” said Cornwell. “I’d write Jim every couple of days, 5-page memos on everything from what I was discovering at Wooster, to what I was worried about and what we had to do.”

Cornwell recalled Jim would usually send back about a paragraph, but it would be the most concise, succinct paragraph he could ask for.

“It’d sit back in my chair and say that’s exactly right,” said Cornwell. “He was a tremendous help as I learned to be the president of a college.”

Cornwell kept mentors throughout all of the major points throughout his career and always advises to have someone as a mentor, whatever level of leadership you are at.

Cornwell’s mentorship journey has been key to forming his views on leadership. To
become a leader, he believes you must be an anthropologist of leaders, watch the great leaders, watch the leaders who fail and learn lessons from those leaders.

“What I’ve tried to do—based on every great leader that I’ve see—is have a clarity of purpose, a very clear reason as to why I’m here and why the organization is here,” said Cornwell. “Refer every single important decision back to the mission; you need to be able to back it by grounding it in the mission.”

The corollary of this, is when you are mission first, the ego is not part of the equation. Cornwell says great leadership takes ego completely out of the picture.

One of his favorite ways to describe his role as president is to help clear away the obstacles so his colleagues can achieve what they are trying to achieve.

“If they accomplish their purposes, they not only advancing the organization, but they are really satisfied in their work,” said Cornwell.

One of Cornwell’s admitted struggles in leadership is finding a carefully engineering balance between patience and impatience. As an ambitious leader, you need patience because change is disruptive, but if you are too patient you are not going to be able to achieve the ideas and visions you are trying to accomplish.

Finally, leaders must possess a great level of humility and humbleness.

“One of the fatal flaws of leadership is the model of leadership as the lone ranger or viewing yourself as the smartest person in the room,” said Cornwell.

Recently retired from her position as a Senior Vice President at Morgan Stanley, Crummer Alumnae Sandee Smith shares her keys to success.

Social Enterprise and Rally: Making Positive Change in our Community