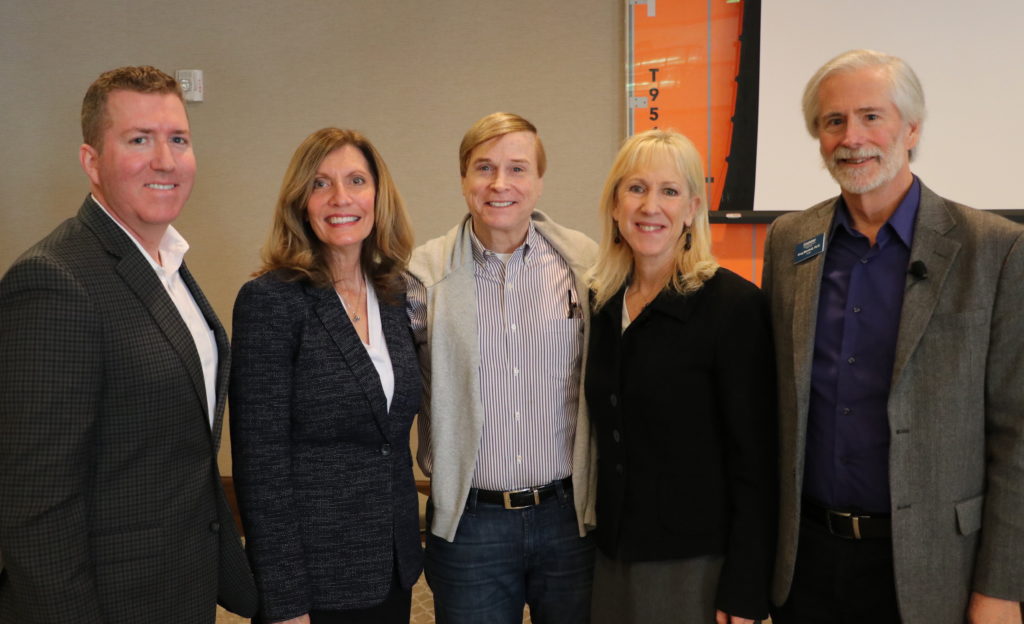 In the first Crummer Dean’s Breakfast Series, three marketing gurus shared their thoughts on building a brand in a rapidly-changing environment.

When you have three marketing experts from three different backgrounds, and one marketing professor with a lifetime achievement award in the same room, there are bound to be diverse perspectives on virtually every topic.

One thing that is agreed upon, however, is that the digital revolution has not only completely changed how we market our organizations, but has also evolved how we define, build and maintain brands and brand experiences.

While social media and technological innovations have provided new, powerful and even fun, exciting ways to reach an audience, it also comes with its set of challenges.

From big data, the challenge of story-telling, and Uber Eats for restaurants, marketing leaders from all organizations are dealing with a new set of obstacles as our society continually grows more digitized.

Russ Klein, CEO of the American Marketing Association, and also a former marketing executive for Burger King, Arby’s, 7-Eleven and more, warns that in today’s day-and-age, everyone is now telling the story of your organization.

Yelp, TripAdvisor, and even a simple Facebook post from a customer that reaches a few hundred people are all examples of how your story is always being told by others.

He says when you stop building your brand through the experience of it, you are simply relinquishing control over how your story is told.

He advises brands to focus on building an experience over everything else.

Roseann Harrington has helped build one of the most recognizable slogans in Central Florida at OUC with “The Reliable One.” She says the most important thing is to build your brand with authenticity.

“There has to be an alignment with who you say you are, who you really are, and who your customers think you are. That’s the most important thing. We used the design thinking process before it was popular,” said Harrington.

Harrington says the OUC brand can become a double-edged sword sometimes, because any time there is a mistake people tend to flip the slogan on them saying, “you’re not being ‘The Reliable One’ today.”

She says their strategy is to always use real people and their real words in ad campaigns, to humanize the company.

John Walker faces his own set of challenges at Ruth’s Chris Steak House.

He admits that marketing in fine dining 10-15 years ago was pretty easy. You knew exactly who your customer was and the way to reach them was via television or print advertising.

“We are now trying to market to three generations,” Walker said. “We are marketing to Baby Boomers, Generation X, who are spending the most money in restaurants right now, and then Millennials, a very large group.”

He says it is constant adaptation to appeal to three generations and understand what they are each looking for in a fine dining experience.

As the market shifts away from legacy media, influencer marketing has come to the forefront as one of the most utilized branding strategies.

Put simply, influencer marketing is a form of marketing where influential people are targeted to show off a brand to their core group of followers. Think of a celebrity on Instagram holding up a Coke bottle.

From John Walker’s perspective, influencer marketing goes deeper than just an Instagram celebrity—everyone is an influencer.

“I don’t have thousands of followers, but I have a group of friends I can probably influence just as much as somebody online that is perceived as an influencer,” said Walker.

He says this atmosphere creates a pressure to perform, but he knows if you can deliver the experience you know you can deliver, things will be fine. He does say, however, brands that are making strategic decisions and changing their business model because of a few people saying something negative online, are going down a slippery slope.

“To me, that is trouble. There are very big brands that are redefining who they are because of a narrative being pushed online,” said Walker.

Roseann Harrington says in the early days of online consumer reviews, organizations found themselves relatively helpless and vulnerable to such online narratives, but analytics have helped CEOs and GMs find a voice. For example, TripAdvisor provides hotels and opportunity to respond to their critics.

“It is interesting to see how General Managers are thanking customers for positive reviews, apologizing for a bad experience, and defending themselves when they feel the complaint is not justified. With the popularity of social media, being able to take someone venting on social media and turn it into a two-way conversation is important,” said Harrington.

In the world of transparency where everybody is a critic and a publisher, Russ Klein says influencer marketing sits on top of all of that. Klein also agrees that analytics have increasingly played a key role—not just in framing narratives—but also in designing and implementing overall online brand strategy.

“What worries me around that, is that marketers don’t abuse their knowledge of data and insight. If you are spending money and resources on data to sell to your customer, instead of designing the experience for them, shame on you,” said Klein.

The Evolution of Branding

A disciple of experience design, Russ Klein says “a brand equals the experience plus the power of the story.” He believes you can build a brand with experience and no story, but you cannot story tell your way into building a brand.

To him, that idea and an organization’s ability to create a friction-free experience have been among the biggest evolutions of branding as we’ve shifted into the digital age.

“Brands like Uber and Amazon have set the standard for a friction-free, time-saving experience. It doesn’t matter how your competitors are in your own space, you’re being measured against higher standards now,” said Klein.

John Walker agrees, saying it is interesting how the digital world has caused this immediacy.

While there is the digitization of nearly everything, Walker does note that one of the leading companies in the digital age, Amazon, has made a 180-degree turn by going out and acquiring Whole Foods.

“Whole Foods is brick and mortar. What Amazon has done successfully and smartly to this point, is starting to bring that convenience we expect into a brick and mortar space,” said Walker, referring to Amazon’s Go program, which allows consumers to simply walk in and out of its store with their items, without having to go through a checkout line.

He relates that to fine dining, where Walker says you cannot lose sight of the tactile, analog experiences that truly make your brand.

“Those analog experiences you have in fine dining trump everything,” said Walker. “We are high-touch hospitality, and you cannot lose that.”

Roseann Harrington says as technology moves forward, brands are grappling with how to give people the high technology, friction-free experience they want, while also giving them a high-touch experience when they want that.

*Note: Roseann Harrington has since left her role at the Orlando Utilities Commission to serve as the Chief of Staff to Orange County Mayor Jerry Demings.

Crummer alum and Golden State Warrior’s Senior Director of Partnerships, Dave Pitt `04 `06MBA, has had a front row seat to one of the greatest sports dynasties of all-time.