With 15 years of service and an official recognition at the annual National Philanthropy Day breakfast, Margaret Linnane ’76 ’96MBA has made her mark on the Central Florida nonprofit sector.

Margaret Linnane admits, she’s not looking forward to retirement as much as most people do.

When you love what you do as much as she does, it’s hard to walk away.

Leading the Edyth Bush Institute for Philanthropy and Nonprofit Leadership as executive director since 2004, Linnane has made Rollins and Crummer a hub of the Central Florida philanthropy scene.

She caught the bug in her early 20s, and since then has done nothing but eat, sleep and breath nonprofit work.

“I have never been good at relaxing,” laughs Linnane. “I don’t have another hobby, so it will be a bit of an adjustment.” 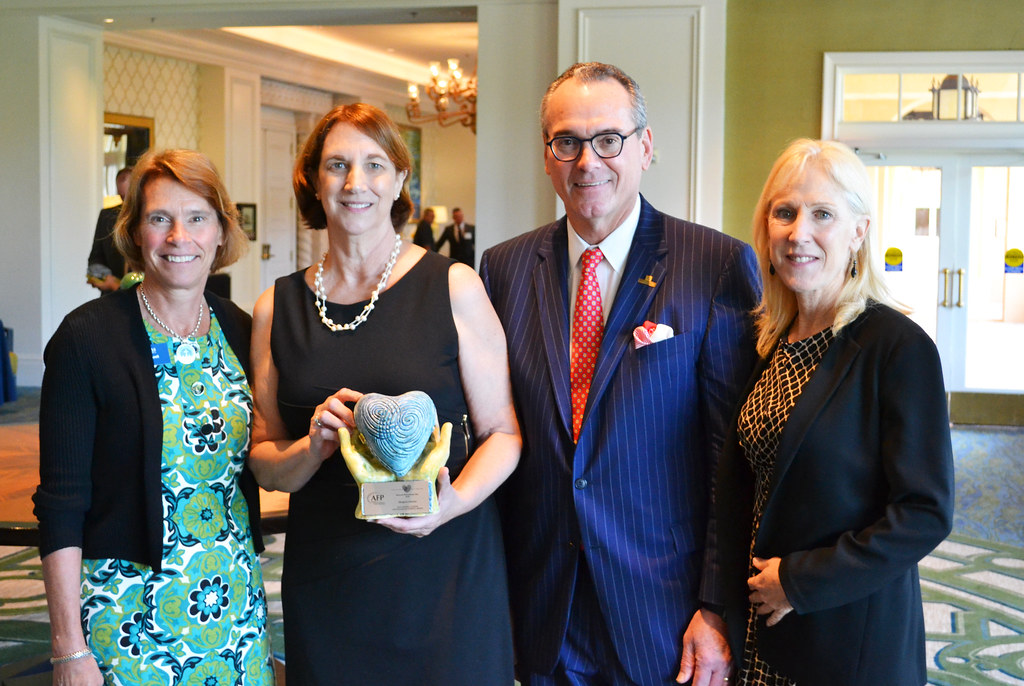 From the Ground Up

Long before Margaret Linnane was leading the Edyth Bush Institute for Philanthropy and Nonprofit Leadership, she heard of an opportunity at a fledgling little food bank in Orlando.

What is now Orlando’s premier food bank, serving nearly 60 million meals to those in need last year, Second Harvest Food Bank was a tiny, struggling organization that didn’t even have food in the warehouse.

“I took the job, because I thought it would challenge me in every way imaginable; I’d have to learn about food, budgets, how to lead the staff—I’d have to learn to do it all. It was going to be a challenge, but I wanted the challenge,” said Linnane.

Under Margaret’s leadership, the Second Harvest Food Bank started growing as rapidly as the City of Orlando was growing in the late 80s and early 90s.

More and more neighborhoods were sprouting up, the city was awarded a professional basketball team and the demand for a strong food bank was increasing.

“The whole city was growing, and we were growing to serve the community,” said Linnane.

A number of years into leading the Second Harvest Food Bank, Margaret realized as the food bank and community was growing so fast, her bachelor’s degree in behavior science from Rollins wasn’t enough.

“I had to have the business background because the food bank was getting so big,” said Linnane. “At this point I had been doing everything based off of instinct, from how we managed to how we invested our money.”

Fortunate enough to be granted the Martin L. Bell Memorial Scholarship, a full-tuition scholarship awarded annually to one nonprofit executive, she was able to attend the Crummer Graduate School of Business.

Learning invaluable information about management and leadership, what she was learning in class was bleeding into her everyday work life.

“Often the week after class I would start making changes to some systems, changing the way we were training and how we did things to make us more efficient,” said Linnane. “We just really moved the organization strongly after I had that educational experience.”

The strong education from Crummer, coupled with her natural managerial instincts transformed the Second Harvest Food Bank into Central Florida’s premier food bank. The empty warehouse shelves turned into multiple warehouses, filled wall-to-wall with food and the employees grew from just a few when she started to over 50.

It truly became an institution in Orlando under her leadership.

“You hope you have a good vision, which I think I did,” said Linnane. “We marketed well; any donor, and anyone who supported the organization could have the confidence and trust in us to run the organization. They want to support a winner, so you really have to make a case for people to do that.”

In the early 2000’s another opportunity arose; this time it wasn’t a fledgling food bank calling her name, but a nonprofit institute aimed at helping all of the other nonprofits in Central Florida.

It was going to be another major challenge for Margaret, but it sounded exactly like something she could take on.

The Hub for Nonprofits

“It was hard to do because I loved the mission so much; any time opportunities came to me to make a change, there was not a mission that spoke to me like the alleviation of hunger spoke to me,” said Linnane.

When the opportunity to lead the now Edyth Bush Institute for Philanthropy and Nonprofit Leadership came her way, that was something she decided she could do, although it was still very tough for her to leave Second Harvest.

She wrestled with the decision, but realizing she could help all nonprofits in Central Florida grow like Second Harvest did, she decided to take the position.

“When you leave an organization for a period of time all you can do is hope and pray that it will keep going, keep going strong, keep developing and serving at a higher level,” said Linnane.

At the Edyth Bush Institute, she would return to working with her alma matter, Rollins and the Crummer Graduate School of Business, educating and providing a “central hub” for all nonprofits in the area.

Prior to the Edyth Bush Institute for Philanthropy and Nonprofit Leadership Center being created in 2000, there really wasn’t a spot for nonprofits to get training and tools to grow their organizations.

Margaret and her team created that over the past 18 years.

“I think it has become the hub of the nonprofit sector—many things flow to or through the Edyth Bush Institute,” said Linnane. “I wish we had something like this when I was at Second Harvest.”

“Every two years we do the Central Florida Nonprofit Compensation Benefits Survey and Report, and that has changed the sector because there was never any information to work with on how to set salaries,” said Linnane. “We’ve had it now for ten years and it’s moved salary benefits very nicely in the sectors.”

She says it hasn’t just helped the salaries of those working in nonprofits in Central Florida, but people throughout the state use that report.

“People who say don’t do that, you can’t make a living or a career out of nonprofits, I say they are wrong,” said Linnane. “You can have an outstanding career, like the way you spend your waking hours and have fulfillment, so I encourage people into the nonprofit sector all the time.”

That’s why it was no surprise to the nonprofit leaders in the community when she was awarded the Sector Impact Award from the Association of Fundraising Professionals in November.

“I was really touched to receive it. I suppose I have had impact on the sector, but that comes with many years of experience and people coming to trust you,” said Linnane.

Linnane will be retiring in early 2019 from the Edyth Bush Institute, and as the days inch closer to the new year, she admits it is tough to think about life outside of the nonprofit sector, but she will continue to pour her heart into it every last day.

“Walking away from it doesn’t feel like an option,” said Linnane. “The Edyth Bush Institute is vital to the sector on what it provides, the training the management assistance, leadership develop and assistance. I am proud of what we are able to do.”

A mother of three children living in three different cities, grandkids in Washington D.C. and a husband that is native of Ireland, Linnane will be doing lots of traveling come the new year.

“We are spending the entire summer in Ireland, so we’ll be on the move a little bit,” said Linnane.

She knows, deep down though, when she returns, if someone comes calling for some consulting help, it will be hard to say no.

“We will see what the interest may be, if people want to continue to work with me,” smiles Linnane.

For Crummer Entrepreneur-in-Residence Pete McAlindon, helping connect people with their purpose and others is his ikigai.