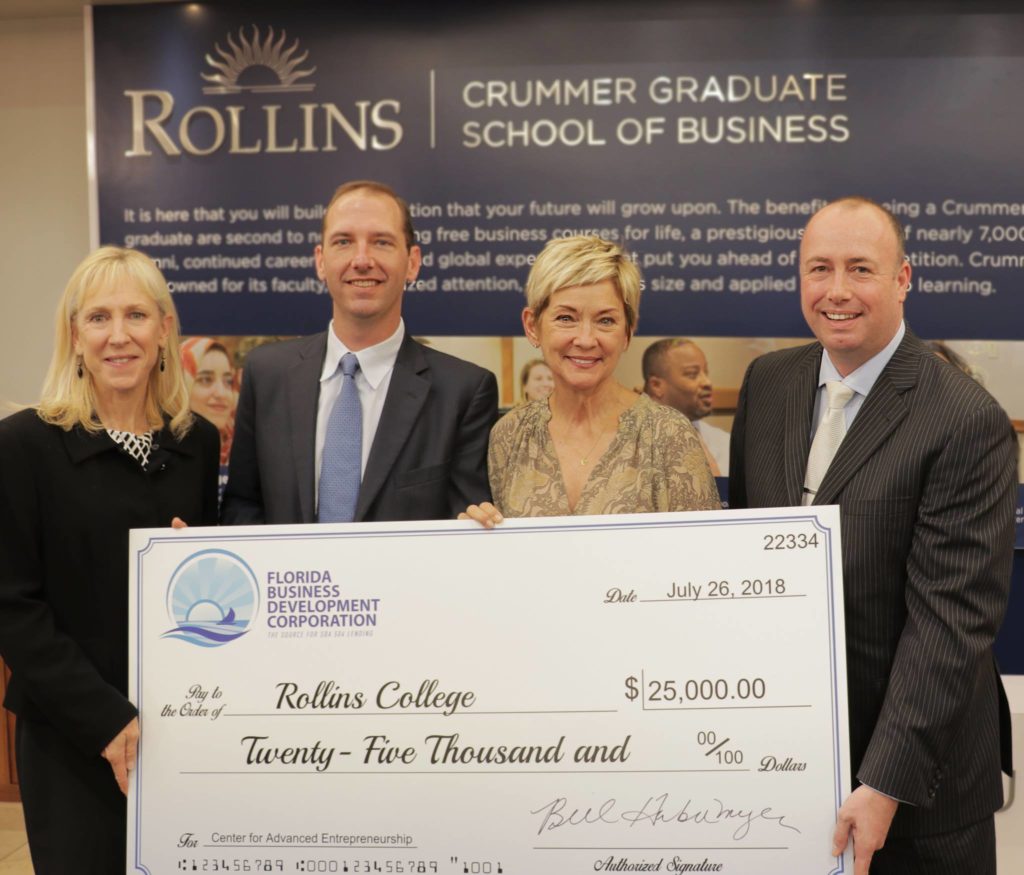 Bill Habermeyer `05MBA and Bob Zinkil `05MBA met while in the same cohort at Crummer, now serve as CEO and COO for Florida Business Development Corporation.

“Bob was in the insurance industry and I was working at FBDC at the time. We were at a hockey game together, catching up, talking about our careers and said it would be awesome to work together someday,” said Habermeyer.

Bill and Bob met while they were Early Advantage MBA students at the Crummer Graduate School of Business in 2003 and immediately became great friends.

They both had a couple years of professional experience before taking the full-time MBA route, and they shared similar life views. However, where they really bonded was over a passion for sports.

“Bill is a Chicago fan, and I’m from Detroit, so we had that little Chicago-Detroit sports rivalry going,” said Zinkil.

Reflecting on their time together as students, it’s not surprising that the pair of Crummer graduates ended up in the highest positions together at the most active small business lender on the east coast of the U.S.

Their mission is to assist healthy, growing companies secure long-term, below-market, fixed-rate financing for the acquisition and development of fixed assets. They can also help refinance debt associated with fixed assets. 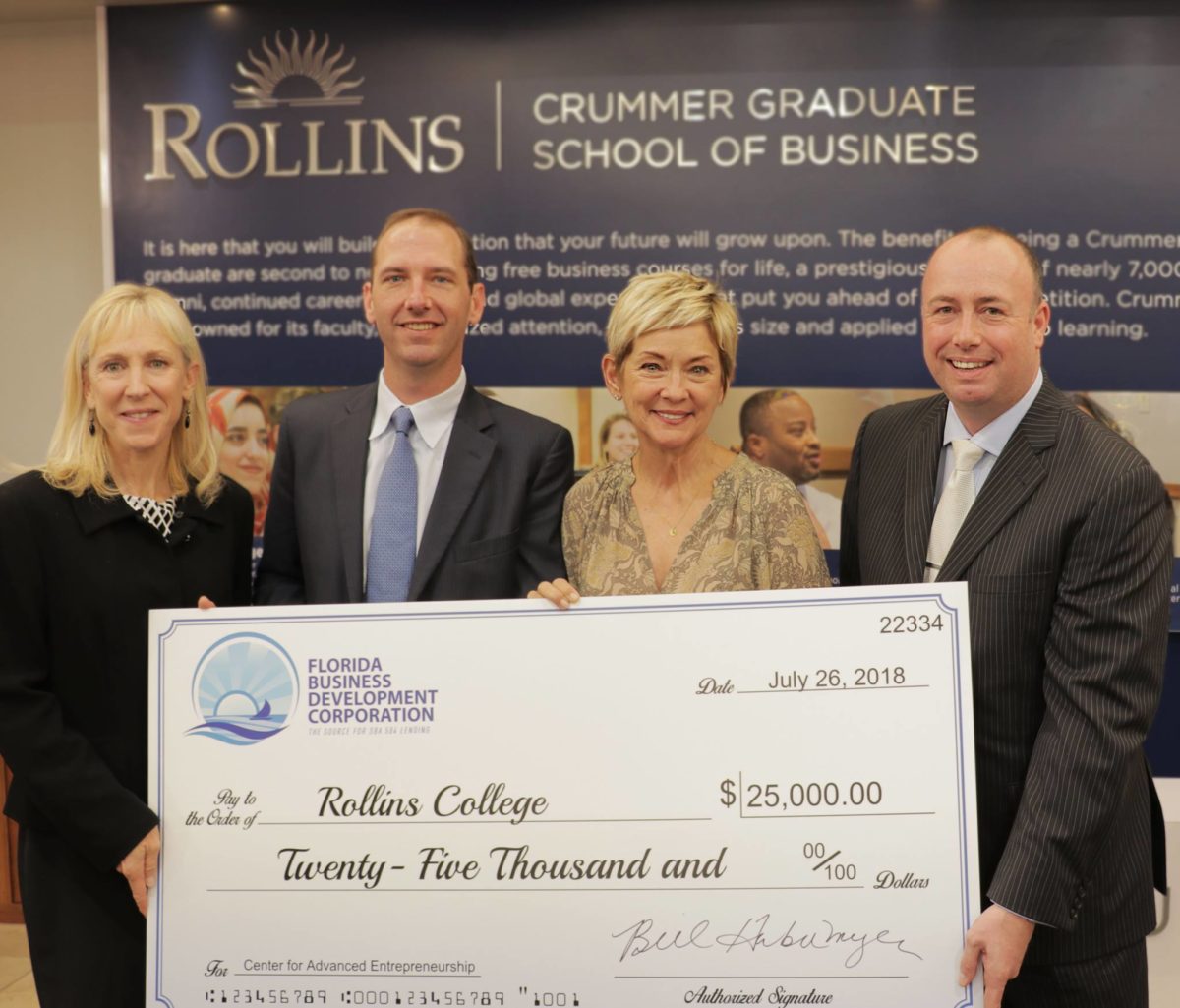 From Crummer to Colleagues

Holding the top two posts at Florida Business Development Corporation was not the first time that Bill and Bob had worked together.

At Crummer, they had a chance to be in the same consulting project cohort, working with an Orlando group that presents an award for a top football athlete in the country.

“It was Bill, myself and another friend of ours doing research on how to help them market themselves better,” said Bob Zinkil. “That was where we started developing respect for each other, knowing we could work well together, outside of just being friends.”

The consulting project showed the pair that they were able to effectively work together, even when things got tough.

“We had to deliver a not-so-good message to [the organization’s board], but it was the right thing to do, and I think being able to stand up and deliver an outcome that wasn’t popular showed that Bill and I could work together,” said Zinkil.

When Bill recalls the instance at the hockey game where they mused about working together someday, he said they were probably subconsciously recalling how well they handled the consulting project.

“We were probably remembering back to that consulting project at Crummer,” said Habermeyer.

Bill spent roughly 10 years working at FBDC, running the Tampa Bay market, after graduating from Crummer, with a short stint as a banker in-between. When there was a void in leadership in 2016, the Board of Directors tapped Bill to lead all of the markets as President and CEO.

“Crummer had a lot to do with my leadership journey,” said Habermeyer, “but I’d be remiss if I didn’t give a lot of credit to my father as well, who is an incredible leader.”

With Bill officially taking over as President and CEO of FBDC in 2016, the opportunity for him to team up with Bob again came when the COO left.

“The rest was history,” said Habermeyer. “It was a dream for us to work together. He still went through an intensive interview process, and it’s worked out really well.”

Bob Zinkil has been with FBDC full-time for 8 months, and Bill Habermeyer says it is hard to emphasize how much improvement the firm has had in such a short amount of time.

Prior to FBDC, Bob Zinkil had worked at bunch of different firms.

He had some good bosses and plenty of bad bosses, so he said you start to look for people who share similar views and temperaments. That like-mindedness between him and Bill had him jump at the opportunity to apply for the COO and Executive Vice President position when it was offered.

Although Bill and Bob may have some light-hearted, heated exchanges over an NFC North football game between the Detroit Lions and Chicago Bears, when it comes to work it’s never malicious, and they are never trying to tear each other down.

An old-adage is to not going into business with friends, but Bill and Bob don’t see it that way, as they are not shareholders. Florida Business Development Corporation is a non-profit with a Board of Directors, so their mission is working together to advance a structure that was already in place.

“We don’t have it where one person owns 51 percent and another owns 49 percent. Our vision and the alignment between Bob and me is doing what is best for our people,” said Habermeyer.

Their work philosophy comes down to constant, candid communication.

“If we can replicate our level of trust and communication with each other throughout the organization, there’s not going to be any pockets of passive aggressive resistance within the firm,” said Habermeyer. “If you look at any relationship frankly, the key is always constant communication.”

In the 8 months of working full-time together, Bill and Bob have found a nice balance in divvying up work between each other based on who is better at the respective task at hand.

They have found, just like in their days doing the consulting project together at Crummer, that they complement each other’s skillsets very well.

“I want Bob to feel challenged respected and rewarded in his work, and I think he wants the same for me. That’s a cool part of the friendship; he’s a guy I can take in the trenches with me and I learned that at Crummer,” said Habermeyer.

Bill and Bob say they use the skills they learned at Crummer on a daily basis, recalling Dr. Bommleje’s leadership and listening courses and how they loved how Dr. Singleton’s courses always had a real-life tilt to them.

“Bill and Bob were both good students who showed lots of leadership potential, “said Dr. Clay Singleton. “They were both keen on finance and looked for every opportunity to learn.”

Today they continue to look to give back to Crummer, recently granting $25,000 to the Center for Advanced Entrepreneurship.

“Our firm has had just over a million dollars in economic development grants that we’ve been able to provide in communities we serve in Florida, Georgia and Alabama,” said Habermeyer. “The better we do as a firm, the more the dollars go up that we are able to give back to the community.”

Fifteen years ago, it was just a dream for Bill and Bob to work together as they grinded away on their consulting project in the basement of Crummer. Today they are not only doing that, but also giving back to other students with hopes of doing the same.

“You always want your friends to be successful and do well in life. The firm has done well enough to make Crummer a better place and give those students more opportunities. That’s the right thing to do,” said Habermeyer.