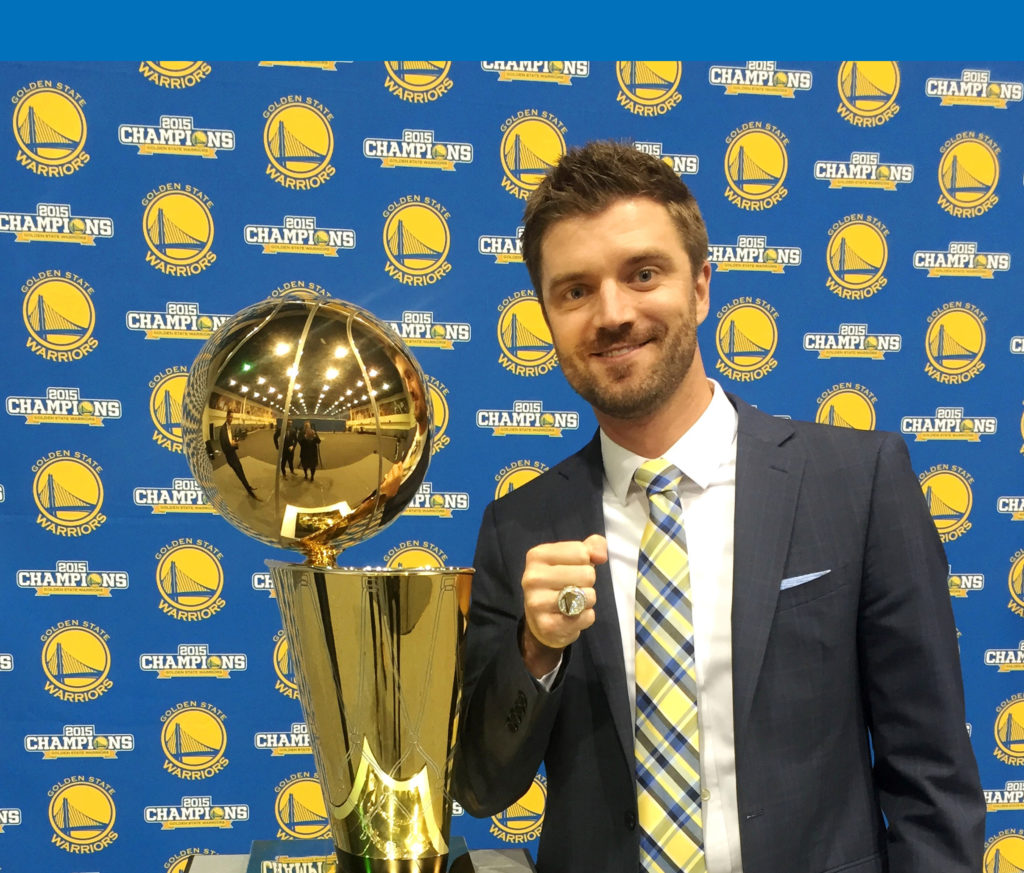 Crummer alum and Golden State Warrior’s Senior Director of Partnerships, Dave Pitt `04 `06MBA, has had a front row seat to one of the greatest sports dynasties of all-time, all the while driving revenue through partnerships.

It’s 75 and sunny — over a million people are lining the streets in downtown Oakland, California.

Dave Pitt is in the heart of it all.

Cheers, clapping and live, rhythmic chants of “Warriors, Warriors” are showering down on him as his hands are starting to feel a little numb from all of high-fives he’s given out.

It’s a completely surreal moment as he walks in the championship parade with the likes of NBA superstars Steph Curry, Klay Thompson, and Kevin Durant.

“It’s the coolest experience you can have in sports,” said Pitt, the Golden State Warriors’ Senior Director of Partnerships. 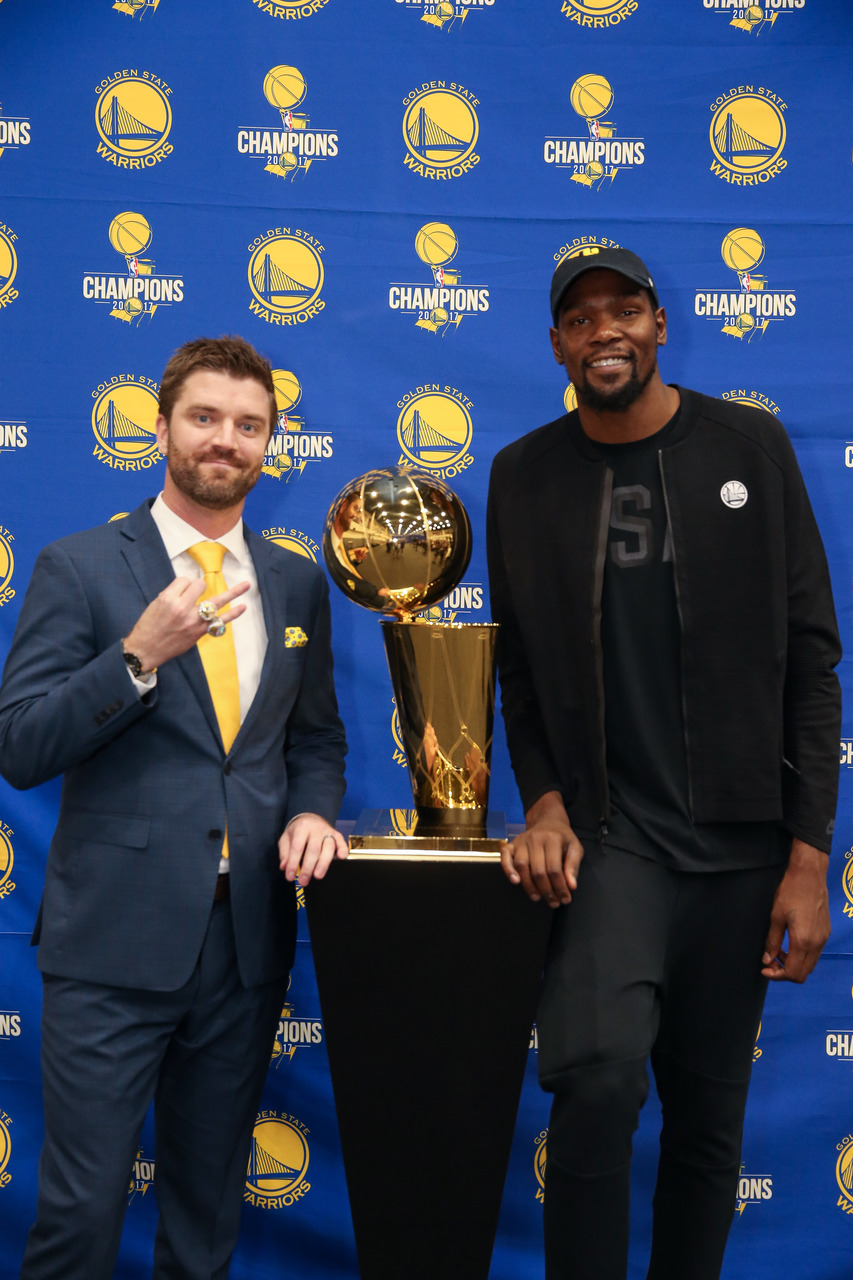 That experience of walking in a major sports championship parade is something a lot of people in the industry will never get to experience.

Pitt has done it three times.

And he has three team-issued championship rings to show for it.

He admits, he is incredibly lucky to be a part of an organization like the Golden State Warriors who have dominated NBA basketball for the better half of the past decade.

“You’ve got to go and pinch yourself to some degree every day and remember how lucky you are to be a part of something as special as we’ve done,” said Pitt.

Before any of this, he was a Crummer student, plugging away on projects in the school’s basement study rooms.

Prior to living in San Francisco working at the senior level for one of the most dominant franchises in pro sports, Pitt grew up a rapid sports fan and an athlete himself, playing Division II soccer for Rollins College.

With a year of eligibility remaining after finishing undergrad, he enrolled in the Early Advantage Crummer MBA program to leverage his marketing interest in the sports business world. Of course, it also helped that he could continue competing as a college athlete.

What he remembers most from his Crummer days are the team-work dynamics, the network he built, and the individual attention he received from professors.

“Crummer did a lot of different things for me in a lot of different ways,” he explained. “It was a great learning tool for working in the real world and the team dynamics you find yourself in. It was real life 101. That dynamic of working in teams is incredibly valuable, working with people from different skill sets and all walks of life.”

Through his network, he got his first break into the world of sports by landing an internship with the David Leadbetter Golf Academy in Orlando, an internationally recognized golf instruction academy.

Upon graduation, he got a full-time offer from David Leadbetter Golf Academy and had his first experience managing partnerships by working with big name brands like Rolex and Cadillac.

“We were only 8 employees but managed 15 golf academies and millions of dollars in partnerships,” explained Pitt.

After four and a half years at the David Leadbetter Golf Academy, he was tapped by one of his connections at the Orlando Magic for a role as their partnership manager.

A die-hard Orlando Magic fan at the time, it was not only a dream job, but also an incredible career move.

The Magic were coming off of an NBA finals appearance, and the new Amway Center just opened off of Church Street, so there was a palpable buzz in Central Florida for the franchise.

Pitt spent three years with the Orlando Magic, building partnerships with major companies as the Magic looked to solidify their footprint within downtown Orlando.

At the end of his third season with the Magic, Pitt’s bosses’ boss was recruited to go to Golden State to be the Chief Marketing Officer for the franchise.

Impressed by the work Pitt was doing for the Magic, he convinced him to check out San Francisco and start developing partnerships out there.

“Within six weeks I was there,” said Pitt.

Developing a Culture of Excellence

When Pitt joined the Warriors seven years ago, they weren’t the juggernaut they are today.

In fact, they were rebuilding from the top down, both on the court and organizationally.

“It was actually a very downtrodden organization up until then,” he explained. “They had new ownership that was very motivated to be good on and off the court.” 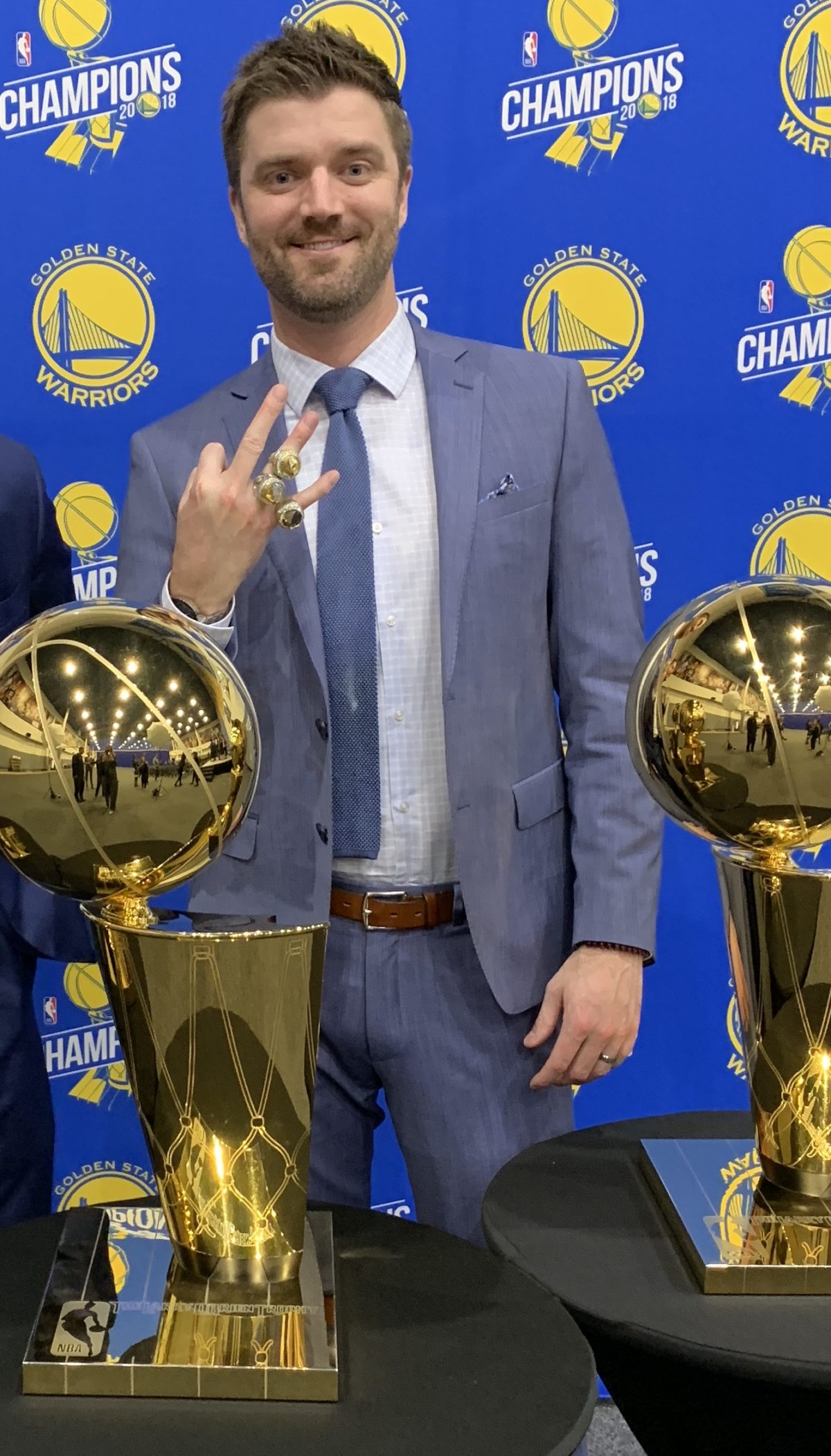 “Our President and CEO Rick Welts says it takes three things to build a successful team and organization in professional sports and they are ownership, ownership, and ownership,” said Pitt.

With the ownership’s insatiable desire to win, the standard was set from the very top that anything less than that was unacceptable.

“That trickles down throughout our organization from our executive staff to middle management staff, to frontline employees. Everyone has that same goal and same energy that we want to be the best at everything we do,” said Pitt.

In his first year with the organization, the Warriors made the playoffs, by his third they won their first NBA title, and they were back-to-back NBA champions in 2017 and 2018.

“Our goal is to be one of the most well-respected sports organizations in the world, and it takes a lot of work, energy, correct decision-making, and learning from past decisions to get you there, but that’s what keeps everyone going,” said Pitt. “The owners will never be content; it can be stressful at times, but that is why we’ve had the success that we’ve had.”

As the Senior Director of Partnerships for the Warriors, Pitt successfully developed partnerships to fund the only privately financed sports arena in America with the new Chase Center, which will be the new home of the Warriors for the 2019-2020 season.

While he can’t control the success of the team on the court, it definitely helps in terms of how he can do business.

“The brand globally has enabled me to have bigger successes and bigger deals with brands that are the envy of a lot of organizations and teams around the world,” said Pitt.

Entering his 8th season with team, Pitt was just recently given the senior title to his name, and his role has grown and expanded into managing partnerships for two e-sports franchises, the Warriors’ G-League team, and all of the properties that the Warriors own outside of the venue itself.

“I have built up a really great skillset, good baseline of knowledge, and I’m far more capable now than when I started here at the Warriors,” said Pitt.

The championship rings aren’t a bad perk, either.

“For the time being, why would I go anywhere else?”

Executives Who MBA Together, Stay Together