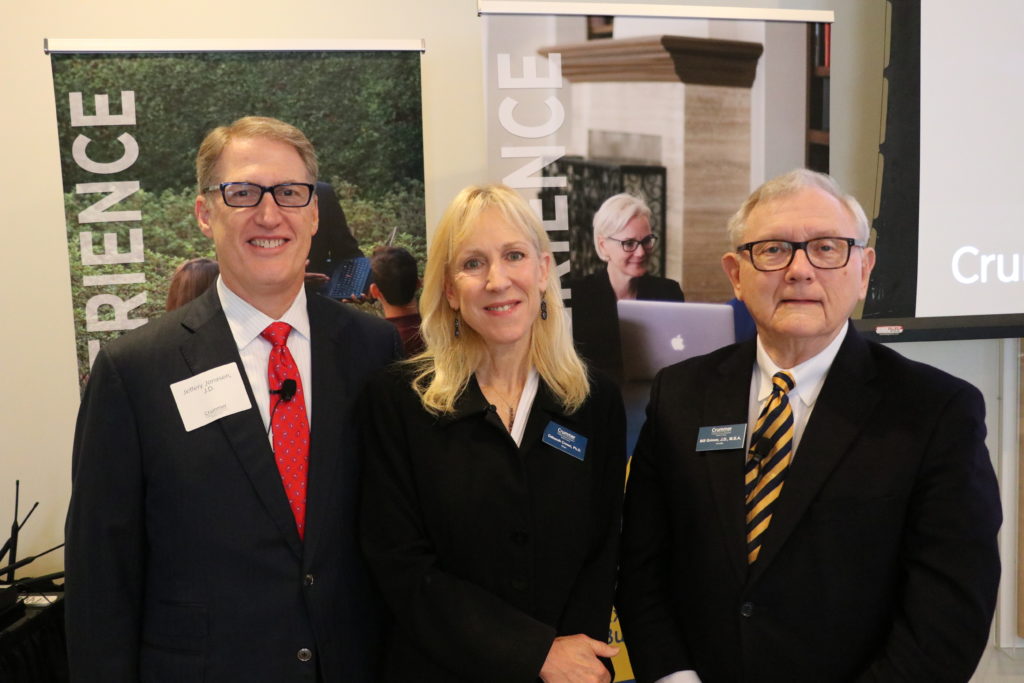 In the second Dean’s Breakfast Series, two negotiation experts discussed how to get the most out of important business deals.

A calling card for many business leaders is the ability to facilitate great deals. Unfortunately, many leaders not only lack negotiation skills—they also misinterpret the fundamental function and purpose of negotiation.

Bill Grimm J.D. MBA, the Executive in Residence for Entrepreneurship and Negotiation at the Crummer Graduate School of Business joined Jeffery Jonasen, J.D., to speak to Central Florida business leaders about the role of negotiation as well as what tactics and behaviors work and don’t work when you enter negotiations.

Grimm, currently a full-time faculty member at Crummer, has 35 years of experience as an attorney. Prior to that, he was the CFO of a publicly held company and a VP of corporate finance for an investment banking firm. He also served as an officer in the U.S. Navy.

Jeff Jonasen is a shareholder of the statewide law firm, Gunster, Yoakley & Stewart. Jonasen has over two decades of experience advising and counseling business owners, executives and boards of directors concerning their business and commercial transactions. 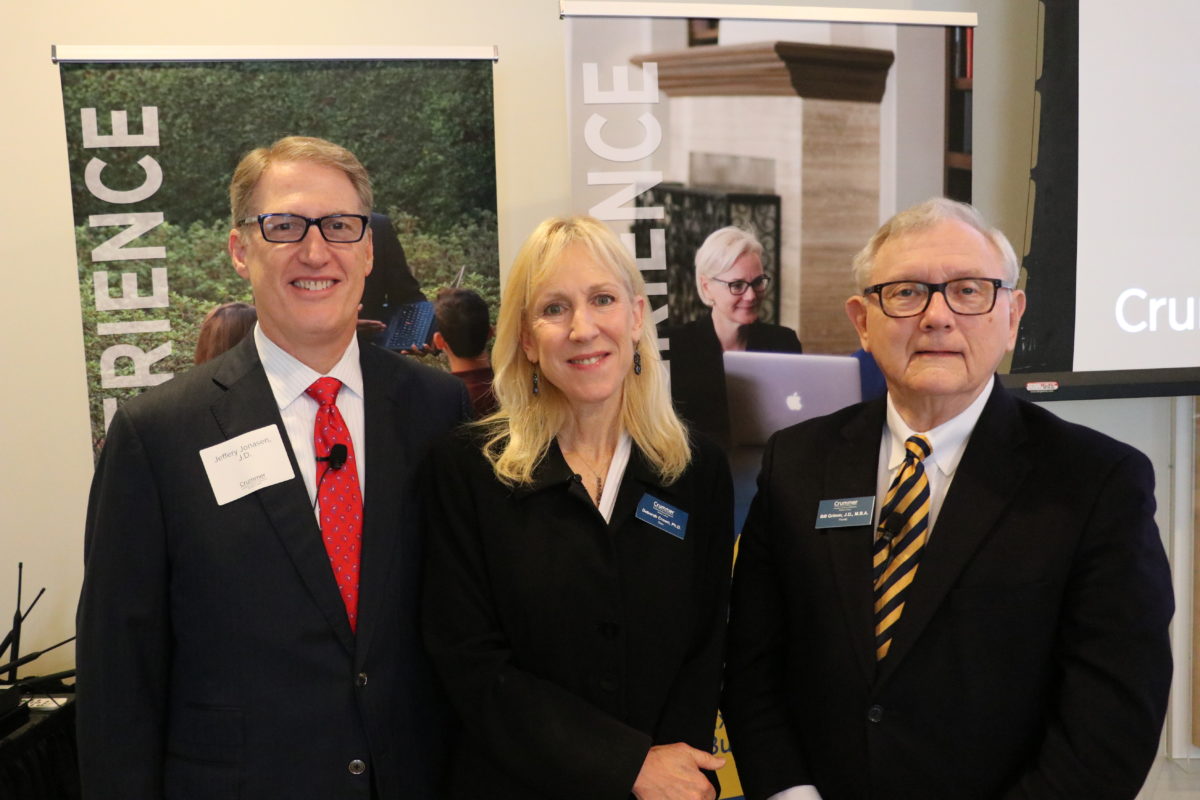 To start off the breakfast series, Grimm wanted to define exactly what negotiation is.

He says negotiation is not persuasion. It’s not a debate or an argument. Negotiation is agreeing to do one thing if the other party agrees to do another thing. If those two elements aren’t there, it’s not negotiation.

The art of negotiation is that you can get things done with negotiation that you could never get done by trying to persuade somebody to do what you want them to do.

When it comes to a successful negotiation, the preparation begins long before the initial discussions of the deal with the opposite party.

Those who fail to prepare are not likely to have a successful negotiation.

“We tend to focus on the haggling too much; we ought to be focusing on the 80 percent [preparation],” said Grimm.

Other mistakes rookie negotiators tend to make is that thinking that bullying the other side into a deal is a good strategy.

Along those lines, lying and even embellishment is also another way that deals fall apart.

“Lying almost always gets caught. I teach my students how to catch lies. Set the other person up with questions you know the answer to,” said Grimm.

Jonasen chimed in, saying this is one of the most important lessons you can learn as a negotiator. Trying to act like you know about things that you don’t will get you caught.

“Know what you know and don’t try to fake it. Faking turns into lying,” said Jonasen.

If the other side is trying to be the bully, don’t fall into the trap of negotiating against yourself.

“If they say ‘I don’t like that, make me another offer’, you tell them to make a counter-offer; don’t make another offer yourself. That’s silly,” said Grimm.

Another big deal in negotiation is the failure to understand cultural differences. Grimm advises if the deal is substantial enough, make sure to have someone from that culture on your side to help you through the process.

“If it’s an international business deal, you need to have advisors [interpreters don’t count as advisors]; they need to be from the culture of the opposite party,” said Jonasen.

Negotiation can be tricky, tedious and often frustrating. Letting any frustration seep into the negotiations can derail them quickly.

Threatening and whining are also both ways to destroy a deal.

“The moment you make a threat, the win-win strategy of negotiation goes out the door,” said Grimm. “It turns into a win-lose. It’s a bad form of negotiation.”

Whining is something you may hear often in negotiation without even realizing it. Avoid being the person that does the “that’s not fair.” Whining gets you nowhere and shows unpreparedness.

Grimm and Jonasen say if you can avoid doing these things, you are on the right track to a successful negotiation.

When speaking about what doesn’t work in negotiation, Grimm and Jonasen both emphasized how not preparing is one of the worst things you can do in the negotiation process.

On the flip side, when speaking about what works in negotiation, they both spoke about a favorite preparation technique.

“In a complex negotiation, role play. Get your whole team to do it; it’s amazing how much comes out by trying to see how the other side will react,” said Grimm. “In large deals, I would take three days with a team, going through role play and having everyone play devil’s advocate.”

Jonasen compares it to presidential debate preparation. It might seem silly taking your team and having them act and pretend like other people, but it teaches you how the other side may think.

Your personality is something that cannot be changed. You are you, so Grimm and Jonasen say make sure you understand who you are and what skills you lack.

Introverts are the opposite, Grimm says. They tend to be great listeners and great at preparing, sometimes over-preparing and not willing to talk. Whether you are an introvert or an extrovert, make sure your personality traits don’t hinder your ability to negotiate.

But it isn’t just about you—Negotiation is usually a team sport.

Make sure your team is on the same page. You don’t want to be the negotiation team where one member’s facial expressions clearly contradict what is being said by other team members.

Finally, awareness over your assets and their assets is vital.

Negotiation occurs every day at all levels throughout an organization. When it comes to complex negotiation that significantly impacts the livelihood of the organization, being knowledgeable on negotiation tactics before you start discussing a deal is absolutely critical.

A flagship program through the Center for Advanced Entrepreneurship at the Crummer Graduate School of Business, ATHENAPowerLink Orlando has been guiding female entrepreneurs for over ten years.

12 Crummer students were on this year’s team that advanced to the national semifinals.