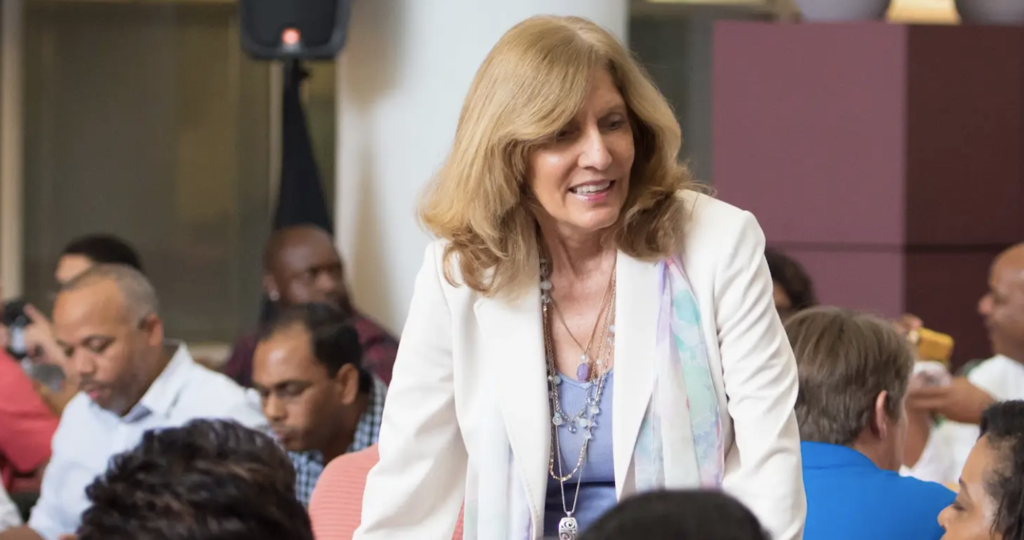 In high school she was the president of the various social clubs she participated in; in college she was her sorority president; and at the Orlando Utilities Commission (OUC), she worked her way to the top—despite being one of the organization’s only female professionals.

Leveraging her Crummer degree and strong leadership skills, Harrington went from the public information coordinator at OUC to the VP for Marketing, Communications, and Community Relations at OUC.

Along the way, she’s received countless awards from the Women of Distinction Award for Lifetime Achievement by the Girl Scouts of Citrus Council, to the 2015 Entrepreneur of the Year by i4 Business. Her latest accolade is being named the 2019 Crummer Commencement Speaker. 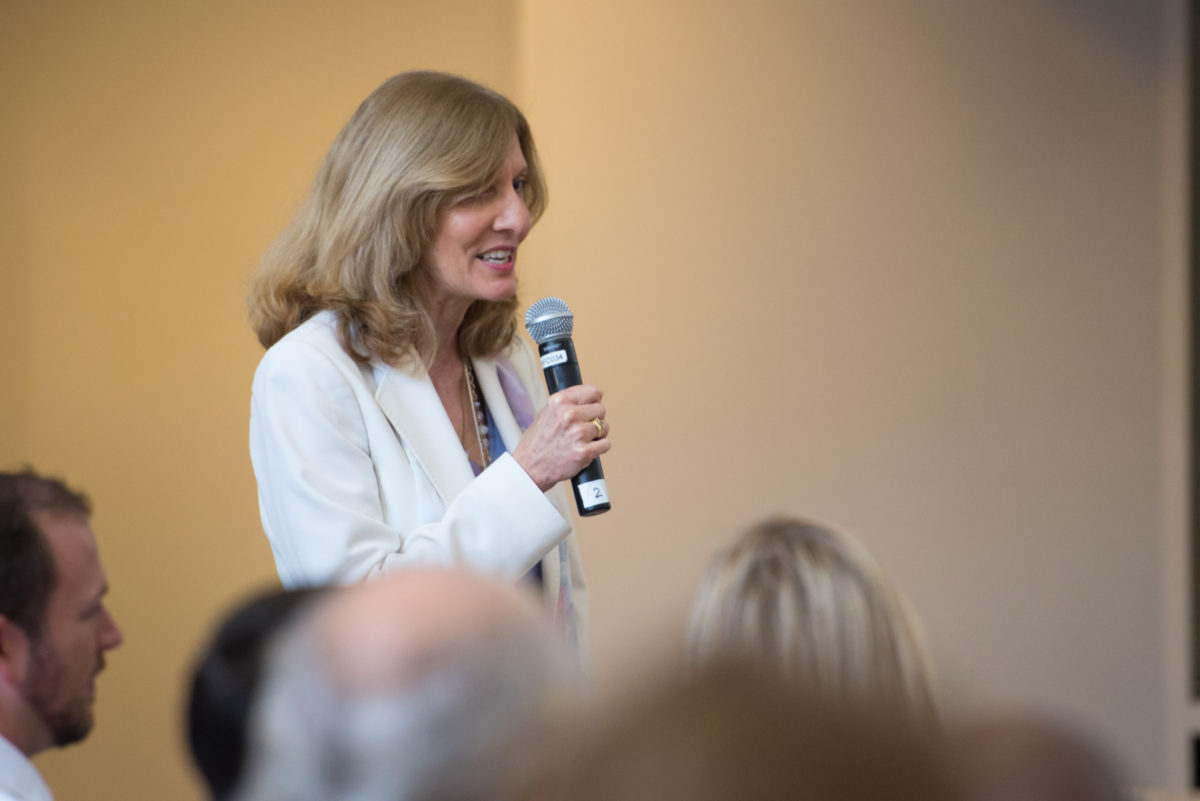 Thirty-two years ago, fresh out of school at Loyola University in New Orleans, Harrington moved back her hometown of Orlando after a short stint in Miami to accept a job as the public information coordinator for OUC.

Her colleagues and friends were initially confused when Harrington took a job in the male-dominated utility industry, but the job market was tough and they were willing to hire her. Soon after taking the job, she quickly fell in love with it.

“When I started, I realized I wanted to get to the top and get to the executive table,” said Harrington.

At the time, the utility industry had virtually no women and Harrington recalls one instance that was a microcosm of the barriers she had to break down in the industry.

“When I first started as the brand new public information coordinator at OUC, I needed a new desk chair,” said Harrington. “They were perplexed by what type of chair to give me because engineers were allowed to have chairs with arms, while secretaries were not. So, they told me they didn’t know what to give me.”

Harrington, unsatisfied by that vague answer, decided to take matters into her own hands.

She thought about it, then went into the closet herself, grabbed a chair with arms, and pulled it over to her desk.

“That’s how women at OUC got chairs with arms,” laughed Harrington. 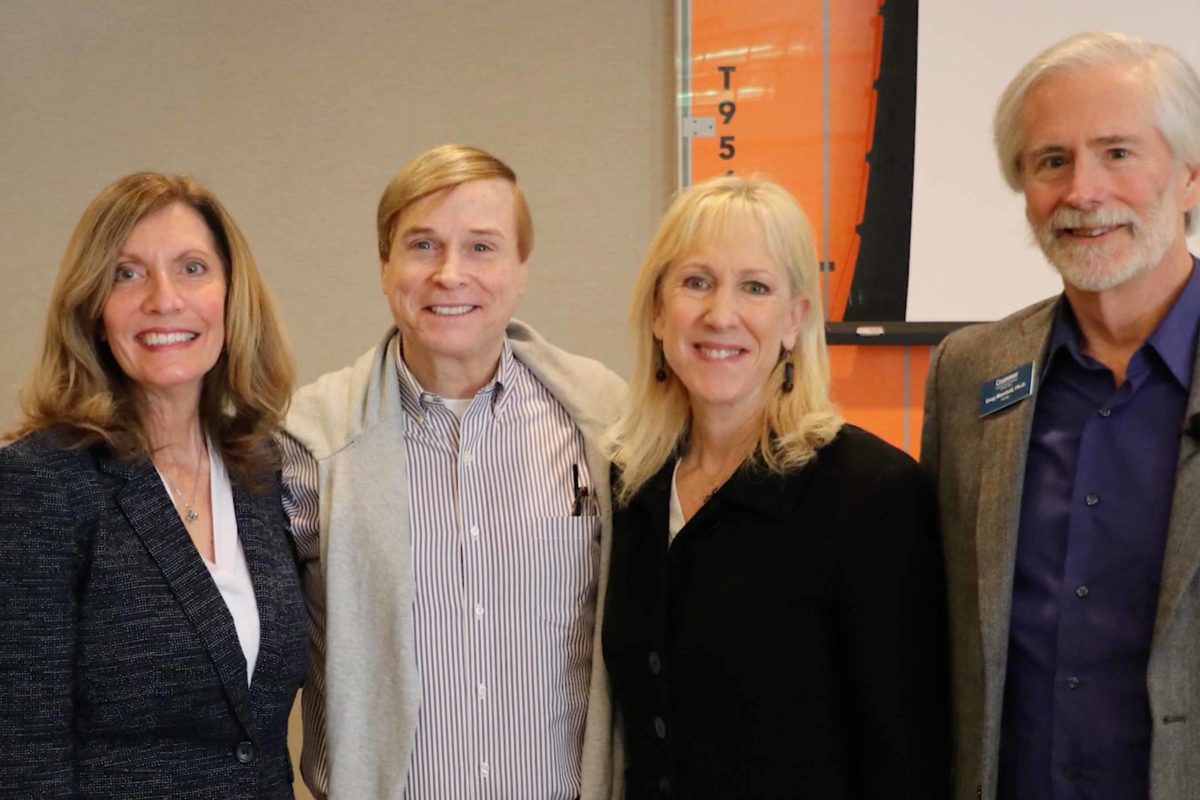 Events like the chair incident made Harrington quickly realize that she had the confidence and the ability needed to forge a path that other women behind her could follow.

She went to company brass and asked how she could move up the corporate ladder. She was told she should move into operations and get an MBA to broaden her educational background.

Coming off of a strong recommendation from her boss, who had a Crummer MBA, Harrington enrolled at Crummer. She cites the School’s experiential learning philosophy and simulated work environment as the biggest reasons for her choosing Crummer.

For the next few years, Harrington cut her teeth at Crummer, learning the analytical skills she needed to succeed in her very technical field, while spending many mornings in operations as the only female at an OUC work site.

At Crummer, the simulated work environment showed her that just because she had a communications background, it didn’t mean she was incapable of leading technical-minded people.

“I did that for six years [working in operations], that gave me the confidence to walk into any room and make a decision. At that point, it doesn’t matter your gender or what you look like, it matters if you can make a good decision,” said Harrington.

Graduating from Crummer in 1990, Harrington had the educational background and now the experience to start making her mark at OUC.

Under her leadership, Harrington led the development of one of the most recognizable brands in Orlando – “The Reliable One” – and found her passion for entrepreneurship which she turned into intrapreneurship within OUC.

She helped create an online self-service payment system that is now the standard for utility payment in Central Florida. She also created the economic development department and launched new products and services.

In 2004, she led the OUC communications effort as the Central Florida area endured three hurricanes. Her team fielded over 1,000 media inquiries and she made over 75 live television/radio appearances in a span of 45 days.

Recalling how tough it was for her as a woman entering the utilities industry, Harrington has always made an effort to mentor future leaders breaking into the industry. In 2012, she published a book; The Businesswoman’s Handbook: Practical Tips for Moving Up the Corporate Ladder to further share her insights.

Mentees like Lisa Curran `15MBA and Jenise Osani `13MBA, both successful in their careers at OUC, extend their gratitude for all of Harrington’s help along the way.

“Roseann was the one that believed in me from the beginning. She actually took my resume out of the ‘maybe interview’ pile when I was applying and said I should be placed on the interview list. She saw my potential, and for that, I am forever grateful. During her time as my leader at OUC, she challenged me take on projects that were outside of my comfort zone and as result, I proved that I could lead projects and now I get to lead teams of people. She helped build the foundation that led me to where I am today,” said Lisa Curran, Manager of Community Relations at OUC.

Jenise Osani, Director of Marketing and E-Commerce for OUC, says Roseann as a mentor was instrumental in getting her and others to apply for a Crummer MBA.

“During my nine years working with Roseann at OUC, I can count five women who attended Crummer including myself. Additionally, several other employees have sought out advanced degrees based on her leadership. She cares deeply about helping others learn from her career and has worked to make the path more transparent for her successors,” said Osani.

Both Curran and Osani say she is well deserving of the honor to be the 2019 Crummer commencement speaker.

“Being a servant leader is at the core of everything Roseann does. She is focused on using her talents to make a difference in the communities she serves but she also proves
you don’t lose leadership qualities when becoming a servant leader. This directly aligns with Crummer’s mission for their graduates to be leaders that ‘add significant value to their organizations and communities’, and that’s what she strives to do every day,” said Curran.

For Harrington, being named the 2019 Crummer commencement was an emotional moment.

“It feels like I’ve made it,” she said. “It is a compilation of everything that I’ve ever done. I never dreamed that I would be selected, and I am so honored and so grateful, because I wouldn’t be standing there on the stage if it wasn’t for Crummer,” said Harrington.

With such a decorated career, being able to come back to Crummer and speak to students taking the leap into the next journey of their lives may be the most important thing Harrington has ever done.

“I am so grateful to Crummer and Rollins for asking me to be there. It means so much to me and is probably the biggest career accomplishment of my life,” said Harrington.

Ryan Courech, co-founder of Meridian Homes, is bringing award-winning unique home designs to Central Florida, winning the Parade of Homes for his category just off of Park Avenue in Winter Park