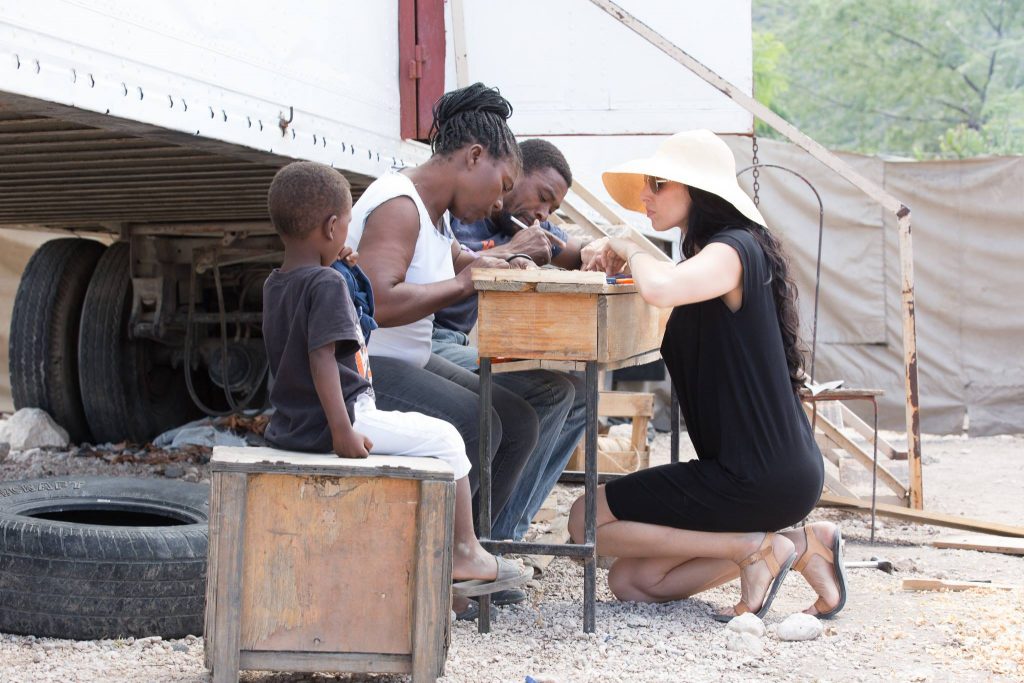 It can be an uphill battle when it comes to fighting poverty in Haiti.

The statistics are startling.

Education isn’t easily accessible to the children of Haiti either.

“Everything is stacked against us,” said Colombino.

When the catastrophic earthquake devastated Haiti in 2010, Colombino answered the call. She quit her job as manager of community participation at Heart of Florida United Way and moved to Haiti to assist in any way she could.

After stepping off the tarmac and seeing the tenacity of the people firsthand, she knew she had to do something.

That was the impetus for REBUILD globally, a nonprofit that fights poverty in Haiti through education and job-training programs.

It’s been ten years and she hasn’t left yet.

The root of poverty in Haiti comes down to the lack of education and job readiness.

The goal of REBUILD globally is to replace conventional methods of charitable aid with a thriving social entrepreneurial ecosystem.

REBUILD globally sponsors youth in Haiti by providing them with the skills they need to excel.

Students who go through the REBUILD program have all of their school fees paid for ($1,500 is the annual cost to put a Haitian student through school), and they are set up with after-school training and mentoring programs.

Since classes are taught in creole, and the standardized tests in the country are in French, the students are also provided funding for French classes to help them prepare for the testing.

“On top of that, we teach creative learning, problem solving, teamwork and have a computer lab,” said Colombino. “In our years in the school system, these are the skills that are lacking for these students, so we just tried to create a space on our campus where those things are implemented.”

Currently, REBUILD has 35 students in their program, and the track record of what these students are able to accomplish as REBUILD graduates is phenomenal.

“Every single kid that has gone through our program has gone onto University,” said Colombino. “It costs $1,500 a year to put a kid through our program, and when you know that 100 percent of those kids will be university-bound, it just seems like a no-brainer.”

After the REBUILD program, the students are all guaranteed jobs at the organization’s for-profit, ethical fashion business, deux mains (meaning “two hands” in French).

Specializing in footwear, handbags, and jewelry, workers at deux mains earn at least double of Haiti’s minimum wage, and have access to benefits including maternity leave, health insurance, and paid vacation.

Convinced to apply for the Crummer Executive MBA program by Dr. Pete McAlindon, Crummer’s entrepreneur-in-residence and a member of REBUILD globally’s Board of Directors, Julie gained invaluable business knowledge and connections during her time at the school.

“In all honesty, I really didn’t want to do it because I was already so busy, but Dr. Pete thought it was the next right step for me,” said Colombino. “The connections I’ve made through Crummer have been awesome.”

Crummer student teams have worked with Julie on consulting projects for deux mains, and professors like Dr. Whittingham have taken student teams to visit her operations.

“The consulting teams have been incredible,” she said.

One of the things that consulting teams get to experience when working with Julie is how real everything is. With limited resources available, the students must think creatively when consulting with REBUILD globally or deux mains.

“When you are trying to fight poverty in the third world, it’s very different than having a startup in America or having access to things we just don’t have access to,” said Colombino.

It made for an easy choice when Crummer Dean Dr. Deborah Crown was choosing her featured charity this holiday season.

“REBUILD globally is the epitome of the Crummer mission to positively impact organizations and communities,” said Dean Crown. “Julie Colombino is an esteemed alumna of Crummer, and we are so proud to support her efforts to change lives in Haiti.”

Julie is honored by the distinction.

“It’s such an honor for all of us. What brought me to Haiti 10 years ago was a terrible earthquake, but what kept me there was the tenacity of the people,” said Colombino. “By choosing us, it keeps our memory alive, even though we are 700 miles away from Orlando, so it means a lot to us.”

If you are interested in helping REBUILD globally and deux mains grow, there are still children that need sponsorship. Julie also suggests shopping through deux mains this holiday season.

“100% of either of those actions has a huge impact,” said Colombino.

Learn more about REBUILD globally and click here for the deux mains catalog.

Associate professor of finance, Dr. Koray Simsek, outlines the challenges facing SRI investors as well as how Crummer navigates the ambiguity with its SunTrust Portfolio