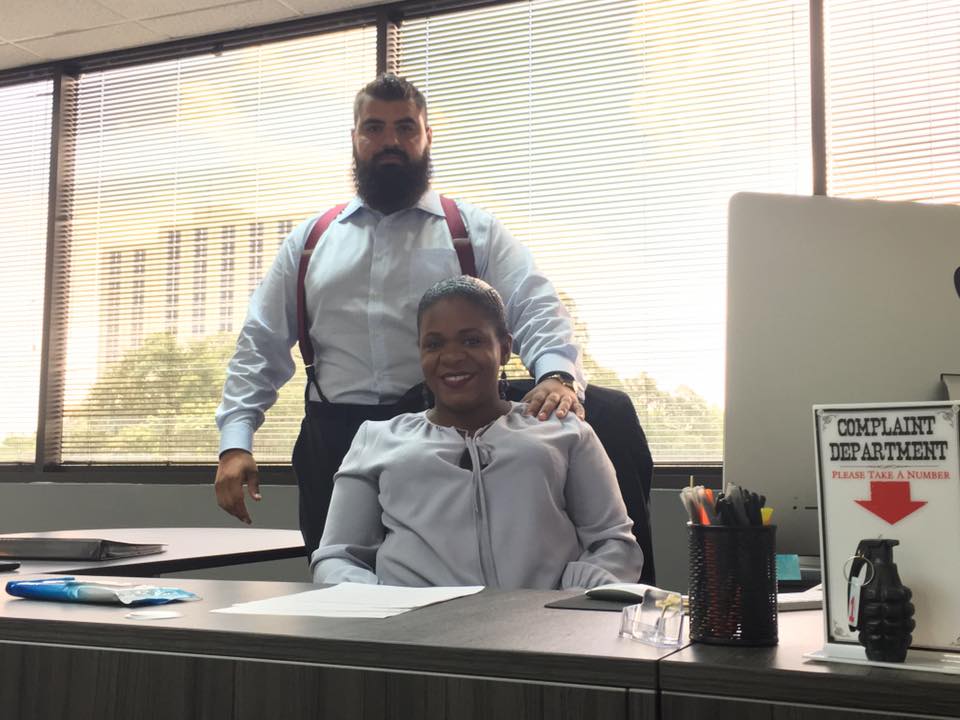 In what she calls “building a business off of a bounced check,” Mia Rock-Rodriguez’s security firm U.S.S. Agency grows to nearly 300 employees.

Mia Rock-Rodriguez made a decision, and nobody was going to stop her.

Tired of seeing her then-boyfriend work for little money and no benefits at various Orlando security agencies, she decided she was going to start her own security company.

“My boyfriend said there was no way I could do it,” said Rock-Rodriguez.

With a career background in marketing, Rock-Rodriguez didn’t have any idea on how she was going to start her own security agency, but she wasn’t going to watch her future husband continually work in a dangerous field for low wages any longer.

“He even petitioned for an increase and benefits, and they said no,” said Rock-Rodriguez. “So, I made the decision, I said I’m going to start my own company.”

Self-describing herself and now husband (and co-owner) as both competitive, Type-A people, it wasn’t easy getting his support at first.

“He stubbornly said I’m not going to help you do it or tell you what I know about the business,” said Rock-Rodriguez.

Unphased, headstrong and stubborn, Mia dialed up the Department of Agriculture and simply asked, “how do I start a security company business?”

“I just asked a lot of questions,” said Rock-Rodriguez. “Usually everyone who starts a security company has knowledge and connection with it, so I started to develop a good relationship with the people at the Department of Agriculture.”

As weeks went on, Rock-Rodriguez was getting all the paperwork and documentation lined up to start U.S.S. Agency, using her kindness to solicit extra help from the folks at the Department of Agriculture.

She was doing this all while balancing her full-time job, but that wasn’t going to last much longer.

“While all of this was going on, I was told that I would be getting laid off from my job,” said Rock-Rodriguez.

On the heels of her last paycheck and an onslaught of bills on the horizon, she was finally told by the Department of Agriculture that she had all of her paperwork aligned to apply for the business license.

The only problem was she was down to her final $400 in her bank account, the business license application fee was exactly $400, and she had a power bill for around $100.

“I said this is a sign I’m not meant for this,” said Rock-Rodriguez.

She then received a call from the Department of Agriculture.

But, kindness goes a long way.

“The people in the office at the Department of Agriculture that I had been talking to for weeks said the person who approves the licenses and cashes the checks had an emergency in the family, and they now were in charge of that task,” said Rock-Rodriguez. “They told me they’ll make an exception for me since I always brighten their day and give me the license, but I have to pay the fee within 90 days.”

They overnighted Mia the license, and her business was born.

“I remember telling my boyfriend, I told you I was going to do it. Well, here it is!” said Rock-Rodriguez. “I said I don’t expect you to leave your job now, but I do have it.”

Eventually, Mia’s future husband did come around and ended up being an integral part of the business and is now a co-owner.

Just as much as he needed her, she needed him for his great reputation that he had as a security guard.

“He contacted someone he knew, and they said we know of his work, we will go wherever he goes,” said Rock-Rodriguez.

That was the first $10,000 a month security contract that got the business off the ground.

“I still hold it over my husband’s head that I started this business and he didn’t, so usually I get the last say on everything,” laughs Rock-Rodriguez.

As they built the business together and got married, Mia still hadn’t had any formal education behind what she was doing.

The business was successful, growing to hundreds of employees and landing security contracts throughout the State of Florida. Her husband handled setting up the security side of things, and she handled all of the internal business work (clients, marketing, accounting etc.).

“I knew I had good business sense; I built a business off of a bounced check, literally,” said Rock-Rodriguez. “I felt like with the chances I was taking, I needed to get some formal backing behind the things I was trying.”

Her dream school was always the Crummer Graduate School of Business.

“I just never thought I would be good enough to do it,” she admits.

After a lot of anxiety and talking herself into it, she finally decided to reach out to the Crummer admissions team, securing an in-person meeting for the Executive MBA program.

“There was so much anxiety leading up to that meeting,” laughed Rock-Rodriguez. “When I actually got into the meeting, I realized I shouldn’t have been anxious at all. They were all so genuine.”

With graduation from the Executive MBA program coming up in May 2019, Mia has already made substantial changes to her business that are affecting the bottom-line.

“I’ve learned so much about understanding my financial statements, I ended up  letting our old CPA go and got a new one. It has saved us a bunch of money just right there,” said Rock-Rodriguez.

The DiSC analysis that Crummer uses to help understand every student’s personality type has also been adopted by Mia and U.S.S. Agency when hiring potential security guards.

“That has helped us so much with our retention rate, which again saves us money and helps us keep the best talent,” said Rock-Rodriguez. “I’ve just loved this program so much.”

The long-term goal of Mia Rock-Rodriguez and U.S.S. Agency is expanding from state-wide to securing contracts along the East Coast of the United States. She also mentions innovating the security industry to start something she describes as “Uber but for security guards”.

While once stubborn about starting their own company, her husband now gets to live his dream job every day.

All off of a bounced check.

“My husband tells me all time that I believed in him when he didn’t believe in himself, and now his hobby is his business,” said Rock-Rodriguez. “We’ve been so lucky.”

CMAC Partners Turns to Crummer to Build on its Success

At CMAC Partners, a financial solutions company in Winter Park, half of the staff are Crummer MBA graduates.